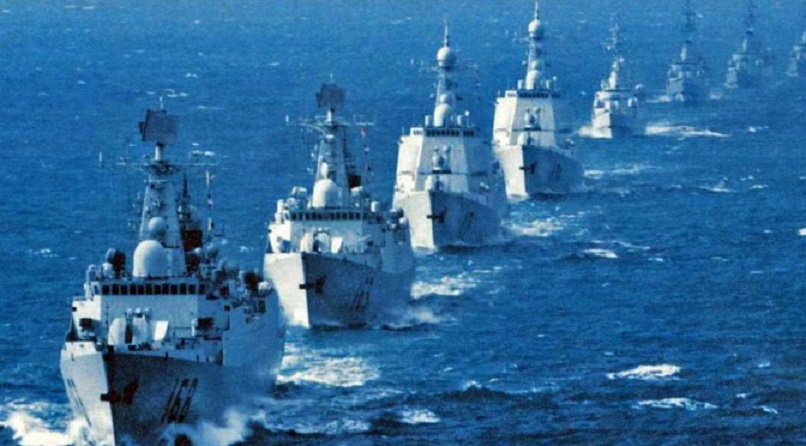 There has been no other period in recent times that has seen intense naval sabre rattling as has been the case in western Pacific. Also, it is unlike the US-led wars in the Persian Gulf (Iraq and war on terror) which witnessed several navies converge in north Arabian Sea-Persian Gulf. The current situation in the western Pacific involves only two protagonists i.e. China and the United States- the former is bullying at least three of the four claimants (Malaysia, the Philippines and Vietnam) in the South China Sea; and the latter is in a deep and intense power rivalry which has expanded into many other contentious issues including Washington’s overt political-diplomatic-strategic support to Taiwan.

During the last three months, naval manoeuvres by China and the US (occasionally joined by its allies and partners), show of force through drills and exercises, Freedom of Navigation Operations (FONOP), and standoffs have been a feature in the region. The security situation in South China Sea-East China Sea-Yellow Sea, a space encompassing China’s First Island Chain, is tense and can potentially turn into a flashpoint whose centre of gravity could be Taiwan and its adjacent waters.

In August, China conducted simultaneous manoeuvers and live firing drills in the Yellow Sea, East China Sea and the South China Sea. The firing of DF-21D (from Zhejiang province) and DF-26B (from the province of Qinghai) into the South China Sea were a signal of its intentions to respond to the entry of US’ spy plane into the Chinese promulgated “no-fly zone” in the Bohai Sea1. The firing of the DF-21D is particularly important given that it is labelled as “aircraft carrier killer”.

In September, China conducted two sets of naval-air drills; first, on 18 September, it dispatched as many as 46 aircraft which crossed the ‘median line’ representing the Taiwanese Air Defence Identification Zone (ADIZ) in the Taiwan Strait. This was in response to the visit by Keith Krach the Under Secretary of State for Economic Affairs who was in Taipei for the memorial service of the former Taiwan President Lee Teng-hui. Beijing announced that these drills were for protecting Chinese sovereignty over Taiwan2. This provocative air display is one of the many such instances in the past when Chinese aircraft and warships have repeatedly intimidated Taiwan and breeched into its airspace and flown over waters close to it.

Ten days later, on 28 September, China once again conducted simultaneous drills along its coast. The Chinese Maritime Safety Administration through “its notices to mariners” identified these locations on its website at Paracel Islands in the disputed South China Sea, East China Sea, and in the Bohai Sea. 3

In a war of words, China and the US have accused each other of the tense situation in the Taiwan Straits; the US state department statement notes that China has  “pursued a reckless and provocative militarisation” in the Spratly Islands and that the Chinese leadership “does not honour its words or commitments”. Meanwhile, the Chinese foreign ministry spokesman labelled the US as “the biggest threat to the peace and stability of the South China Sea”.

There are at least three situations arising from aggressive posturing by China and can be expected to continue in the coming months, or at least till the US elections scheduled in November this year. First, the US will continue to provoke China by increasing FONOPs in the South China Sea. It is also plausible that more high ranking US government officials could visit Taiwan and this will surely irk China but would attract the usual protest from Beijing.

Second, Taiwan should expect many more provocative air intrusions by the Chinese Air Force and a repeat of 1995-96 Taiwan Strait missile crisis-like the situation is a possibility. In the latter case, China is conscious that such a move will encourage the US to deploy additional forces in the region. It could even be a catalyst for the US to revoke the ‘one China’ policy which surely is a ‘red line’ for China that Beijing would avoid at all costs. Besides, the disruption in global shipping, international air traffic which is yet to recover out of the recession from the COVID-19 pandemic, and insurance rates would soar very high and impact on the Chinese economy which is recovering from the pandemic. 4

Third, any Chinese attack on Taiwan would erode goodwill with the ASEAN, whatever little is left after COVOID-19 pandemic. It is fair to assume that China will be careful not to invade Taiwan, but tensions with the US over the South China Sea will continue till the US elections next month.