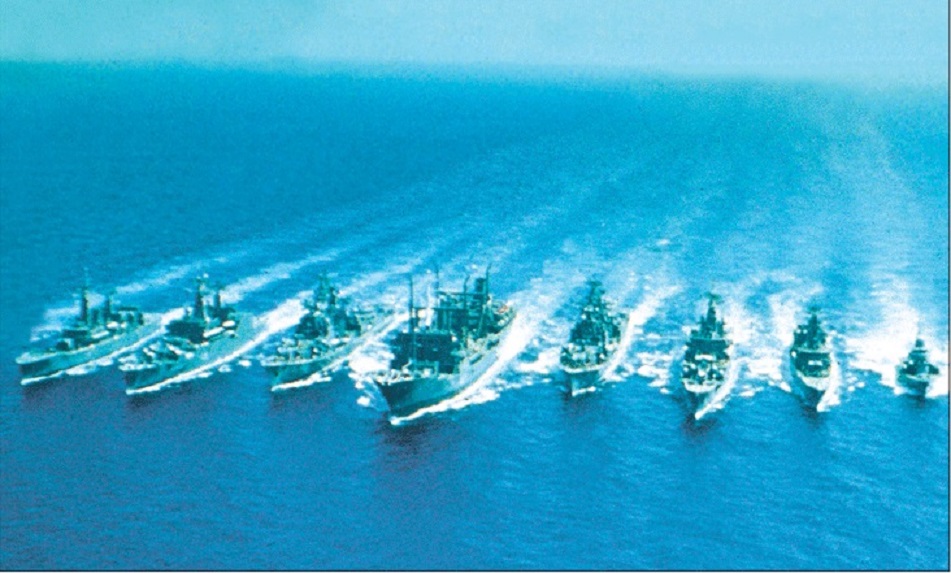 A revisionist power like China needs to be countered with strength, for, anyone out to alter the status quo is unlikely to be amenable to reason. So, while India exerts strength economically and diplomatically, the military must remain ready to act. As the Indian Army stays engaged with the Chinese along the LAC, while also managing the sinister pursuits of Pakistan that persist even in these times of Corona, and the Air Force stands by in support, the nation has the option of turning to the Navy, to hit the Chinese in one place where it really hurts. At Sea.

There are three ways to face a geopolitical threat. Make peace with the adversary, build allies or get strong to act if required to act alone. The history of deceit and doublespeak from China down decades renders making peace a difficult option. Though making allies appear practical, there are imponderables, especially when democracies are involved. As the man on the street in a democracy has the power to influence Govt policy, elected Governments cannot be faulted for tweaking foreign policy to cater to domestic considerations. Australia moving out of the QUAD and moving back in is one such example. Internal distractions too affect the quantum of muscle individual countries can spare for any collective effort. For instance, USA today may have limitations, with an increasing preoccupation with COVID 19, racial tensions and an upcoming Presidential election. The sanest option is to increase our own capacities and grow strong. A country like India understands this and has been steadily making progress over a long time, deftly balancing myriad fiscal requirements at the national level for a large number of sectors.

History shows that no one can be assured of victory in a military conflict. Terrain, weather, ill-timed catastrophes, bad form, allies who turned up from nowhere, technology, or simple plain luck have turned the tables in numerous instances. War not being a binary affair, real armies fight against whatever odds, and with what is available at hand. What constitutes victory too is a matter of perception. While states that accepted their realities and waged war with nothing to lose could afford to take some hits, states that have had a compulsion to appear invincible have had no such leeway. They didn’t have any room to make a dent. Military end states achieved in conflicts alone aren’t important. Even punches landed during the conflict mean much at the negotiating table. Loss of face is akin to defeat, for some.

Imperatives for PLAN in Indian Ocean

For all the perceived superiority of PLAN in sheer numbers and military technology, they have serious limitations while defending their interests in the Indian Ocean. The advantages that the Indian Navy enjoys in the vast home waters they regularly ply are not lost on the Chinese. Hence their sustained deployment of about two to three ships in the Arabian Sea in the name of Anti-Piracy patrols since 2008, an attempt to understand the IOR environment.

Unlike on land where the enemy’s location is restricted by geography, at sea the enemy could be anywhere around. This makes searching for them a difficult task for even the strongest of navies. Moreover, the sea poses another unique problem, that of neutrals, both warships and merchantmen. In normal times, about 50 to 70 warships from a large number of countries are present in the Arabian Sea alone every day. They are there for a host of reasons, like Counter-Piracy, Counter-Terrorism, Fishery Protection, Presence Missions, Research, International Exercises or Diplomacy. The presence of these ships brings on the need for positive identification, which complicates the task of search and detection. As most identification is done through sensors from large distances, a large database of units, in various sea conditions and from various physical angles is critical. Complicating all this are thousands of merchant ships that ply the Indian Ocean every day. Collecting this information takes time and a lot of effort, always presenting local powers a definite edge.

MDA is collected with inputs from MPA, Satellites, Coastal Radar Networks, mandatory reporting data from merchantmen, information shared by friendly nations in the region and from warships, submarines, aircraft and civilian craft of our own and from friendly countries. This too is a time-consuming task. Further, as units at sea are constantly on the move, they are picked up before they enter the Indian Ocean and their positions are kept regularly updated till they exit the waters of our interest. For instance, a ship in the South China Sea, East Atlantic Ocean or the Mediterranean could be in the Indian Ocean is a few days. The perpetual surveillance, data collection and data processing effort involved in this is extremely difficult for any extra-regional entity.

A major portion of the inputs for MDA come from MPA. Unavailability of bases for MPA to operate from the IOR is a serious limitation for PLAN. Using airstrips from their perceived ‘pearls’ in the IOR is unviable. This is because the Laws of Armed Conflict, which makes any third country that gives military support to anyone side in conflict becomes a legal target for the other side.

With the multitude of fronts that the Chinese have opened up, they will have limitations in sparing adequate combat units to safeguard their interests in the Indian Ocean. Though what will be left after catering for their conflicts in the South China Sea, the East China Sea and West Pacific is a matter of conjecture, it is not likely to be substantial. An attractive option for them would be to rely on Nuclear Attack Submarines (SSNs) to gain asymmetric advantages. However, a careful examination of the operational parameters of PLAN SSNs, the Time and Space involved and the need for communication, targeting data and operational support either from shore or dedicated supporting ships hanging out in remote parts of the ocean doesn’t reveal any capacity for useful time on task in the Indian Ocean. Moreover, specialist ships like Naval Tankers, Repair Ships and Depot Ships are picked up on entry to the Indian Ocean and kept a track of, as long as they remain in waters of interest to us. They can of course resort to the symbolism of the kind they used when a diesel-powered Song class submarine surfaced in the middle of a US Carrier Battle Group off Okinawa in 2006. But it is for professional navies to call out symbolic acts and continue their work undeterred.

With about 80% of China’s energy import and a lions share of their raw materials and exports being transported through the Indian Ocean, the ‘Malacca Dilemma’ remains a reality for them. If they alter their Sea Lines of Communication through alternative routes, they will pay heavy penalties by way of having to settle for smaller crude carriers and increased Time and Space problems. The advantages that accrue to the Indian Navy in home waters in tracking Chinese trade and targeting at will at chokepoints are significant.

Doctrinally the IN caters for full spectrum operations and exercises these regularly. Exercises with friendly foreign nations have also been regular, leading to excellent comfort levels in mutual understanding, data sharing and communications. One proof of the great strides being made in international cooperation in the IOR towards data sharing is the unique Information Fusion Centre – Indian Ocean Region (IFC – IOR) set up by India at Gurugram. This centre currently fuses information from 18 countries and 15 international maritime security agencies. With liaison officers from the foreign countries scheduled to be positioned soon, the IFC – IOR will bring major gains for MDA.

For over two years, the Indian Navy has adopted a new doctrine of Mission-Based Deployment, with gains in the flexibility available for early intervention in a situation, enhancing day to day MDA and increased confidence among friendly IOR countries on Indian support being ready at hand.

The essential actions for the Indian Navy operating in their waters is a relatively simple preparation for a quick transition to war. With information available on Chinese shipping and our units spread around, as many Chinese ships as possible need to be tracked as they move through the Indian Ocean and made aware that they are marked. As much operational turnarounds of ships are to be done at ports in India or abroad in order to retain our replenishment ships at sea in full capacity. Further, in case the ante needs to be upped, a few units could be deployed to the South China Sea on goodwill visits to friendly SE Asian countries, for which, the necessary capacity excess exists.

With the support of several IOR countries being critical for the Chinese in the event of conflict at sea with India, they can be expected to do more of what they have been doing, by way of economic and material inducements. Proactive counter diplomacy is essential from the Indian side to prevent the Chinese from obtaining assurances of operational support. For this purpose, it will be important to maintain excellent relations with Sri Lanka, Mauritius, Seychelles, Maldives, Myanmar, Thailand and Bangladesh. Further, just as in the military realm, diplomatic support to SE Asian countries currently having conflicts with China could be enhanced, simply to up the ante if required.

Realities of geography and current geopolitics, as well as the relative balance of military power at sea between China and India in the Indian Ocean, make it possible to hit them in a place where it hurts. At sea.