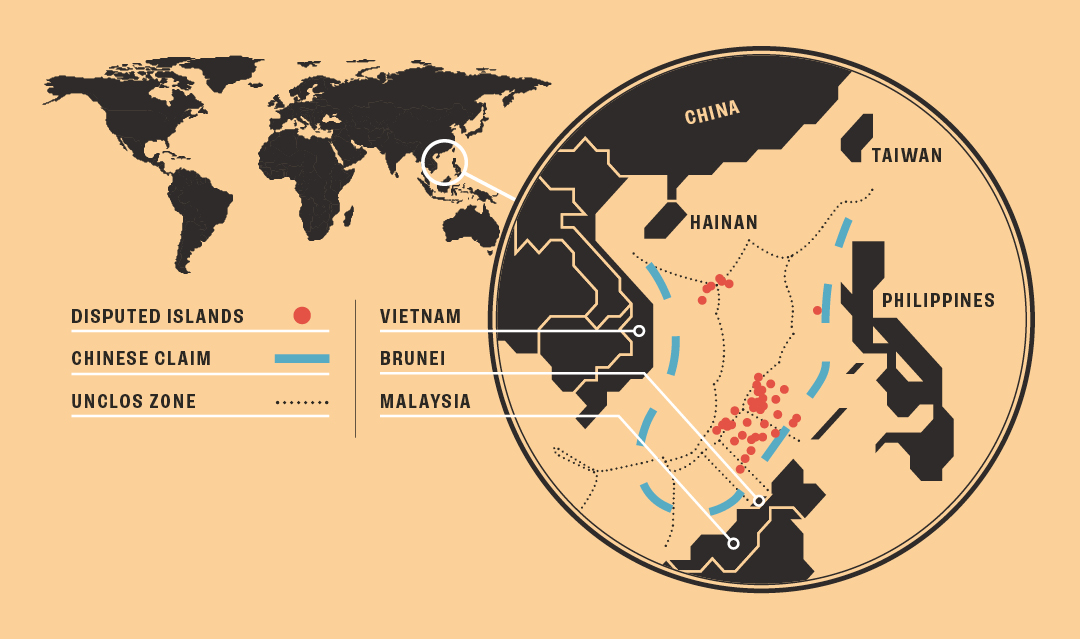 Chinese posturing in the South China Sea is always aggressive and is creating a muddle amoung the neighbours in the region.

Recent satellite imageries published by Simularity, a US-based technology show presence of bulk raw material (sand) and other supplies at the Chinese occupied Subi Reef, a ring-shaped coral atoll in the South China Sea. The imagery also confirms that Chinese container vessels frequently visit Subic Reef to deliver logistic supplies to sustain troops and construction material, and one such vessel can be seen berthed at the Subi Bay jetty as of 25 August 2020. It is also assessed that between 6 November 2020 and 22 March 2021, 2250 containers were removed from the island.

These imageries and satellite pictures are indicators that preparations are underway for either expanding infrastructure or for repairs of existing facilities. It is also fair to assume about “early phases of major construction on Subi Reef,” An earlier imagery of February 2021 assessed that China had reclaimed about “2.85 hectares (7 acres) land on the southern edge of the atoll which also “encloses a lagoon and has a channel for vessels to enter and leave”.

Yet another satellite imagery published by Simularity shows nearly 200 fishing vessels including some vessels of the Chinese Coast Guard at Whitsun Reef claimed by Vietnam, China, and the Philippines. The report also notes that Chinese fishing vessel has been operating out of the Whitsun Reef (arriving, mooring and departing) since December 2020.

There is visible concern over these developments in Vietnam and during a press briefing, Vietnam’s Foreign Ministry spokeswoman noted that Chinese vessels at the Subi reef which Hanoi calls as Da Ba Dau, had infringed on its sovereignty – “Vietnam requests that China stop this violation and respect Vietnam’s sovereignty,”

It was also emphasised that operation by Chinese ships within the territorial sea of ​​Sinh Ton Dong in the Spratly Islands claimed by Vietnam “violate the provisions of UNCLOS on the operation of foreign ships in the territorial sea of the coastal state, contrary to the spirit and content of the Declaration on the Conduct of Parties in the South China Sea (DOC), complicates the situation, is not conducive to the negotiation process of the ASEAN and China in the South China Sea (COC)”. Meanwhile, Vietnam has dispatched a Coast Guard vessel to the area and Foreign Ministry spokeswoman stated that Vietnam was “exercising its duties as regulated by-laws”, including international law.

The above developments at Subi Reef and Da Ba Dau and a subsequent statement by Vietnam’s Foreign Ministry spokeswoman are an indicator of turbulent times ahead and merit attention for at least four important reasons. First, there is no letup in Chinese attempts to reclaim-expand territory in the South China Sea. It has consistently built infrastructure on occupied features and a large number of these have military use for launch and recovery of helicopters, surveillance and reconnaissance, and monitoring shipping and fishing activities and some of these features static and mobile missile batteries.

Second, Subi Reef is just 16 nautical miles from Thitu Island, also called Pagasa by the Philippines, and is under its occupation. It has built a beaching ramp at a cost of US$ 26 million for unloading construction material for infrastructure to house military personnel and the civilian population.  In 2020, during his visit to the island, the Philippines’ defence minister had stated that there were no plans to militarize the island with “weapons that are heavy, like canons or missiles” instead the purpose is to  “develop this area into a viable community”. Under the current circumstances, the Philippines may reassess its earlier position of not militarizing the Pagasa island encouraging additional build given that Subi Reef is witnessing an aggressive buildup of infrastructure.

Third, it is now time for Vietnam to start thinking about leading a dialogue among the regional marine law enforcement agencies such as the Coast Guards for confidence-building measures. It has been argued that maritime law enforcement (MLE) vessels, primarily coastguard vessels, are “preferable for sovereignty protection” given that their “presence in disputed areas”  attract low levels of political and security risks, particularly when “there are pre-existing tensions between neighbouring countries” such as the South China Sea. In this context, the Heads of Asian Coast Guard Agency Meeting (HACGAM), a grouping of 22 Member States and multilateral organisations which aims at cooperative and proactive efforts to address maritime issues confronting the region should lead and Vietnam can call for a special conclave to conduct a dialogue.

Finally, an urgent dialogue between the ASEAN and China over the finalization of the Code of Conduct (COC) on the South China Sea (SCS) is needed. This issue is closely associated with China’s new Coast Guard Act announced in January 2021 that caught the ASEAN nations by surprise. Also, the recent US and Taiwan memorandum of understanding to establish a working group to “improve communications, build cooperation, and share information” on coast guard-related efforts could potentially be a distraction for China from the COC-SCS given that US Coast Guard is already deployed in the Western Pacific to help allies enforce their claims in disputed waters. In December 2020, a US cutter had boarded a Chinese fishing boat illegally operating in the waters of the Pacific nation of Palau.

There is a need to mitigate the aggressive Chinese Posturing in the South China Sea by all the peace loving nations in the region.