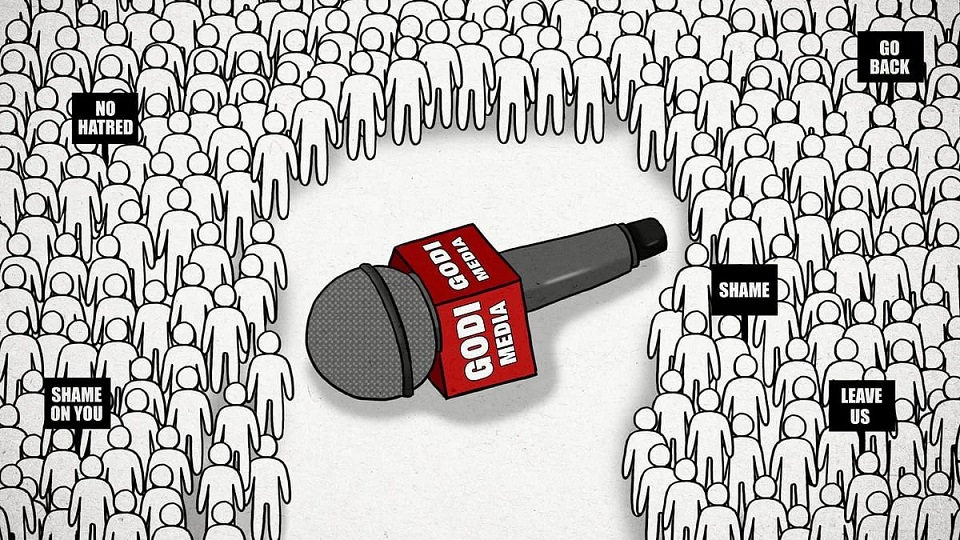 Senior politician and former cabinet minister for Finance and Foreign Affairs in Atal Bihari Vajpayee cabinet from 1998 to 2004 Yashwant Sinha tweeted on 16 March 2022, “First tell a lie, then thru your captive social and ‘godi media’ repeat it a thousand times to convince gullible people that that is the truth. But truth has a bad habit of prevailing over falsehood ultimately. What can you do about that?” Earlier, in 1990-91, Sinha was Finance Minister in the short-lived Chandra Sekhar cabinet. A political turncoat as he jumped the ship from Janata Dal to Bharatiya Janata Party means overnight he became Rightist abandoning Secular Socialist credential. Now, he is one in the galaxy of Vice-Presidents in the secular Trinamool Congress led by his junior colleague in BJP led NDA government.

For long (not exactly remember since when), I have been reading/hearing in various media about the term called ‘godi media’. But, so far, I have ignored the term discarding it as the work of people of “idle minds devil workshop”. However, when I read the above-quoted tweet with a mention of ‘godi media’ tweeted by Yashwant Sinha and read the same in The New Indian Express in its three selected TWEETS OF THE DAY, I strongly feel the issue deserves my attention. So, this piece!

While searching for the parents of the term, I find he was none other than once often a time highly popular NDTV Hindi Channel lead anchor Ravish Kumar, who first coined the term ‘godi media’, literally means ‘media sitting on the lap’, and was given birth probable in the year 2018. Going further, I noticed in some reports, India Today’s lead anchor Rajdeep Sardesai coining another term ‘lap dog’ in a similar vein. He once opined, “A large section of the Indian media has become a lap dog, not a watchdog”.

In 2018, on World Press Freedom Day, some senior journalists and social activists demonstrated in New Delhi protesting, among others, against the ‘godi media’, which have been allegedly pro-government since GE2014. Again the term was found wide use during the time of the Citizenship Amendment Act (CAA) protests and Farm Laws protest from 2019 to 2021 with claims that the issues and protests had not been deservingly discussed, covered and presented in mainstream media or ‘godi media’.

My detailed study over the issue totally confused me as I could not distinguish which is ‘godi media’ and ‘lap dog’, and which is not as per the definition offered by eminent journalists such as Ravish Kumar and Rajdeep Sardesai.

My question, therefore, is: if Ravish Kumar is not part of ‘godi media’, and so he wrote a letter years back informing PM that he came to New Delhi with a tin box from remote Bihar district with big hope and now finds himself rejected, how could his anchored programmes and channel have lost popularity that they enjoyed decade back? What went wrong in-between? Have the millions of audience gone wrong or bribed in the meanwhile so they deserted NDTV and Ravish Kumar? Or they were patronized by the previous regime, so were popular then? Here, the issue raised was found incomplete without the lesson that DD editor Ashok Srivastav taught to Ravish Kumar in a YouTube interview in which he alleges NDTV itself was born and brought up in the lap of UPA PM Dr Manmohan Singh. (For details watch https://www.youtube.com/watch?v=w8JzTJnmPww).

Now coming back to Rajdeep Sardesai, I would like to remind my readers what happened on 26 January 2021. He tweeted, “One person, 45-year-old Navneet, killed allegedly in police firing at ITO. Farmers tell me: the ‘sacrifice’ will not go in vain”, though the TV visual clearly showed the farmer died in a tractor overturn, a clear case of an accident. The objective of the tweet was to fuel the violent reaction of gullible farmers agitating against Farm Laws. For this lack of professional integrity, his employer had taken off air his programmes for two weeks and a monthly salary was deducted. Earlier, he was reprimanded by former President Pranab Mukharjee for transgressing his journalistic privilege while interviewing him and begged public pardon. On several occasions, he has been found notorious for misrepresenting facts. Even Sardesai did not spare Pranab Mukharjee, announced his death much before he had died.

In his show ‘Prime Time’ on 26 February 2020, during CAA agitation, Ravish Kumar resorted to spreading half-truths and full lies. Most shocking was when Ravish, while speaking about the 24 February shooter who fired at Delhi Police personnel, identifies Mohammad Shahrukh as ‘Anurag Mishra’. For the 26 February show, Ravish claimed that police had not yet arrested him while he was arrested on 25 February itself, 24 hours before his show premiered. He said, “The situation of the Police is such that they have not yet arrested him. Police says his name is Shahrukh but if you see on social media, he is called Anurag Mishra.” This was surprising because no one had referred to the shooter as ‘Anurag Mishra’ till then. He then asks Delhi Police to speak out on his identity again. He then played an undated speech of his reporter who appeared to be asking Delhi Police personnel about Shahrukh’s arrest. Slyly, Ravish Kumar then played the videos of BJP leaders Anurag Thakur, Kapil Mishra and Pravesh Verma addressing rallies ahead of Delhi elections to cast aspersions that their speeches have led to the riots a month later.

Notwithstanding these facts, if Yashwant Sinha does not understand who is ‘godi media’ and who is lying thousand times despite his faith that ‘truth has a bad habit of prevailing over falsehood ultimately’, there is none in this living world to teach the IAS-turn-politician octogenarian. Farm Laws were branded anti-farmer thousand times not only in Indian media but also in western media till it was revealed in horse mouth (Yogendra Yadav in NDTV) that it was a ‘political stunt’ keeping in mind the Uttar Pradesh election. Now, who will hold responsible for hundreds of deaths in yearlong protests at the Delhi border?

Apart from Yogendra Yadav-NDTV’s revelation, the Supreme Court panels on Farm Laws, tells 84% of farmer organizations were in favour of laws. When this is the fact, who is ‘godi media’ and who is not? Are they who supported agitations or those who opposed?

Last but not least is Jaswant Sinha’s tweet as quoted above. He branded Mainstream Media and Social Media ‘godi media’ simple because they have reduced Sinha as a non-entity in Indian politics as he wants to piggyback on somebody to be a minister. Even if for Ravish Kumar ‘godi media’ is ‘media sitting on the lap’, for Yashwant Sinha this is ‘Modi media’. The media has been repeatedly reminding Sinha that in GE2014 and GE2019, BJP has won the elections under the leadership of Narendra Damdordas Modi, and the party’s parliamentary party elected him as its leader. On the basis of these facts, Modi has been made Prime Minister of India, and it is his prerogative -as per the constitution- to select his cabinet colleagues. If he thinks that ‘above 75 age is brainless’, so be it for him. If Sinha thinks he is not brainless, he should have been taken care of the party before GE2014 as did Modi, got for him the party command and became PM beyond his 75 age. Since Sinha failed to do so, he should accept the time-tested constitutional mandate and accept the reality following the footsteps of elderly leaders like L. K. Advani, Dr Murli Manohar Joshi, Sumitra Mahaan, etc. from the party which had made him senior ministers ignoring his turncoat taint. In this, he can save his image, now getting soiled, and the country’s politics which has been struggling to rescue itself from tainted dynasties. These are not lies.