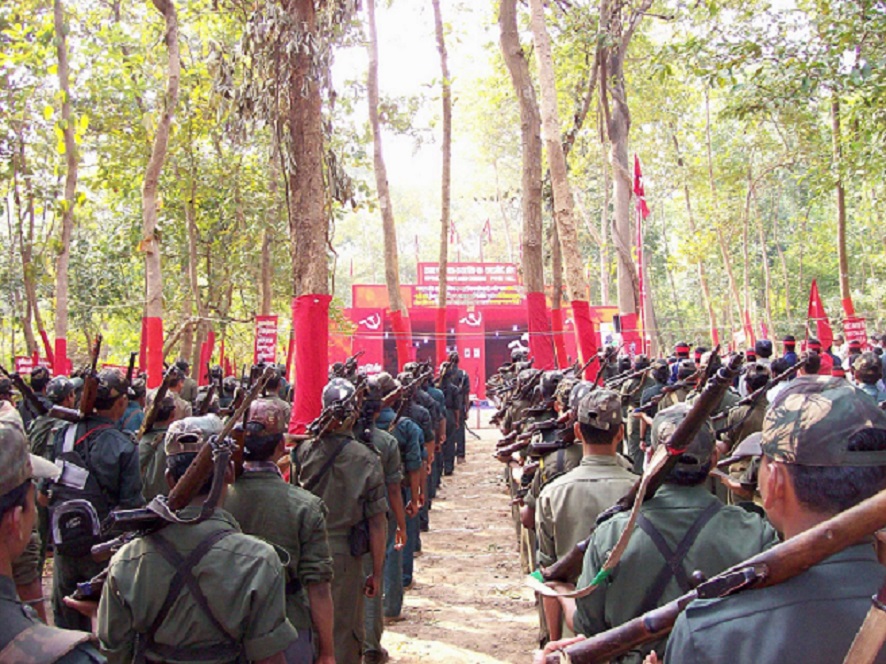 Fighting the naxalites has become more challenging for the central police forces.

India is plagued with Naxal terror or Red Terror, whatever you may name it. This is a long outstanding issue that is not being tackled earnestly to eradicate this ill. I will not go into the background of the problem, but it is clear that the areas affected by Naxal terror are remote, forested, hilly and low populated areas. In this article, I am making an effort to discuss the reasons for the problem and what can be done or should be done to eradicate this problem.

Naxalism is an idea that started from a place called Naxalbari in West Bengal. It spread like wildfire in the North-East; however, it has been contained in this area to a great extent. In West Bengal, it gets a lease of life during every election and is being nurtured by the Political parties. Then it showed up in Orissa, Eastern Madhya Pradesh, East Maharashtra, Chhattisgarh, Andhra Pradesh and Telangana. However, it is heartening to know that the effect of Naxalism has been minimised to a great extent in Andhra Pradesh and Telangana. All this is perhaps due to concentrated efforts of the State Govts, good support by the Central Govt and tireless efforts by the State Police and CAPFs.

A similar situation had existed in the forests of Madhumalai on the tri-junction of the three states of Karnataka, Andhra Pradesh and Tamil Nadu during the 80s and 90s where Veerappan, one of India’s most wanted and most elusive brigands who murdered with impunity, kidnapped famous people, was termed as a sandalwood smuggler. Veerappan was finally shot dead in his jungle hideout by elite commandos using some of the very tactics he employed for well over two decades to build a vast criminal empire.

Many studies have been undertaken to delve into the causes and impact of this internal turmoil. In this article, I would not like to go into very many details of the reasons for rising in the internal strife caused by the Maoist school of thought but briefly dwell upon the matter. In the last many years the gap between the rich and the poor has been widening to alarming proportions. The poor feel that they are being robbed of what is rightfully theirs by the rich who are living an ultra-luxurious life. With the rising disparity due to technological and scientific advancements, a lot of automation has been taking place thus reducing the availability of jobs. With rising unemployment and a heavy increase in the population [mainly in the weaker sections of society], the struggle for survival has increased. However, money can easily be available if one plans to snatch it. This has caused increased thefts, purse snatching and other unlawful activities, especially in the younger age groups.

The treatment meted out to the lesser educated and lower-income group by the elite and the government employees leave an everlasting poor impression on the minds of youngsters. The difficulty in getting benefits from various Governmental schemes launched for the poor and the favouritism and corruption at every level of the State as well as Central Government distances these youngsters away from the mainstream. And hawks are always waiting on the sidelines for such disgruntled elements to take them under their wings.

In urban areas, the awareness is quite high and the redress mechanism works to a reasonable extent and efficiency. However, in the rural areas, it’s literally a “Jungle Raj” where the political sidekicks are the warlords and their word rules the region. Very severe atrocities are meted out to the weaker sections of society. Gradually leaders emerge within the disgruntled groups and an underground movement takes birth. This phenomenon can be widely seen in remote areas, which have poor infrastructure in terms of roads, mobile connectivity, remote locations far from the Tehsil and District Headquarters, low economic growth, poor educational facilities etc. these areas are usually marsh-lands, forested areas, poorly populated areas due to poor or no infrastructure to earn a decent livelihood. The District, State and Central Govt officers seldom visit such areas, if at all. The environment shows that there is no Governance in the region and they have to survive at the mercy of the local “dadas” or leaders. In step the Maoists, Red-terror and other War-lords.

The aim of these local musclemen is to collect all these disgruntled elements and open a morcha against the elected government, which already does not have any presence. Many, no, most, no, maybe all these groups get Political patronage by one or the other political parties. These people are used against the opponents during elections etc. and at the time of garnering votes. This the main reason for poor political will to eradicate such armed gangs. Though a lot more can be written about the development of the anti-establishment system or parallel local governance, it’s time to search for the remedies to eradicate this malice that is plaguing a reasonable area of our democratic country.

So, having understood the rise of the local militancy, what do we do to eradicate it? It is clear that there is a lack of governance in these areas. So the first thing is to create a strong governance structure. Create more government department offices in smaller towns of the affected areas where the populace can go to get their issues sorted out. Establish more Tehsil Offices and post in Tehsildars, Deputy Commissioners, Supdts. of Police [don’t leave the areas with 4 policemen, who shave once every 15 days and do not attend to grievances of the common public], Public Distribution System. Establish more Post Offices, Bank branches and other governmental offices. Open more schools, of course, with staff, teachers and other infrastructure. The District authorities should visit such areas at regular intervals. Improve road infrastructure, communication facilities. Give facilities to the Industrialists and businessmen to start their establishments in these areas. Provide safety and security to all who want to start businesses or production units in these areas. Create adequate electricity supply, agricultural environment, business opportunities, medical facilities etc. Hence, before embarking upon this, area dominance has to be ensured by the CAPFs and local Police. Such areas are prone to routine corruption. Stamp it out with an iron fist.

The Government of India has many wonderful welfare schemes for the upliftment of the poor. However, the implementation is very faulty and there is a poor follow-up infrastructure setup. These schemes do not reach such remote areas to help the economic development of the population of the area. The people controlling such areas do not want any development and threaten the authorities as well as the population from involving themselves in these developmental activities. The fear of such people has to be removed from the minds of the local population. For all this, the Government has to be seen working in these areas and should be within easy reach of the residents.

To sum up, Governmental control should be exercised in these areas. All facilities available in small towns should be made available in these villages. The initial expenditure on the infrastructure will be high, but over a longer duration of time, the heavy investment will pay for itself by creating a positive environment and lead to development in these highly neglected areas. Bring in all governmental welfare schemes with easier terms and relaxed eligibility for benefit of the people. I am sure there are many highly educated and experienced administrators in India and in the Government to work out the schemes in detail. Make this into a five-year plan and get into serious and sincere implementation.

I have intentionally refrained from commenting upon the reasons for the high casualties amongst the CAPF cadres, in the last decade, because my information will be more of hearsay rather than objective. However, one issue that troubles me all the time needs to be brought out. Being a military veteran, I wish to highlight that in all the wars India has fought so far, the military operations during internal strife like the North East, Kashmir etc., the casualties have been in jawans, JCOs as well as officer cadres, even up to Commanding Officers, the last being Col Babu who was martyred in the Galwan area fighting the intruding PLA troops. Though I have the highest regard for our fighting forces, be they from the Indian Army or the BSF, CRPF or other CAPFs, one thing that stands out is that none of the casualties has been in the IPS or their immediate subordinate cadres. The highest ranks casualties in such skirmishes have been Inspectors and Dy. Comdts., that too, thankfully once a while.

If we want to get an upper hand over the militants/Maoists, we need to get our commanders into the field leading our men from the front and taking spot decisions to change tactics depending upon the ground situation, launch counter-attacks and safeguard the lives of our troops. For this, every IPS officer who is placed above the CAPF troops has to come out from their air-conditioned abode and fight the Maoists. Another way out could be that right down from DG onwards, should be officers of that Service itself and not imported or para dropped. Or, leave the CAPFs to be commanded by Indian Armed Forces Officers and JCOs. Again, I will suggest our strategy experts work out a system where the CAPFs [or at least some of them] are brought directly under the Indian Army for admin as well as operational purposes. Can we raise some Infantry divisions with proper legal powers to fight the Terrorists and Maoists?