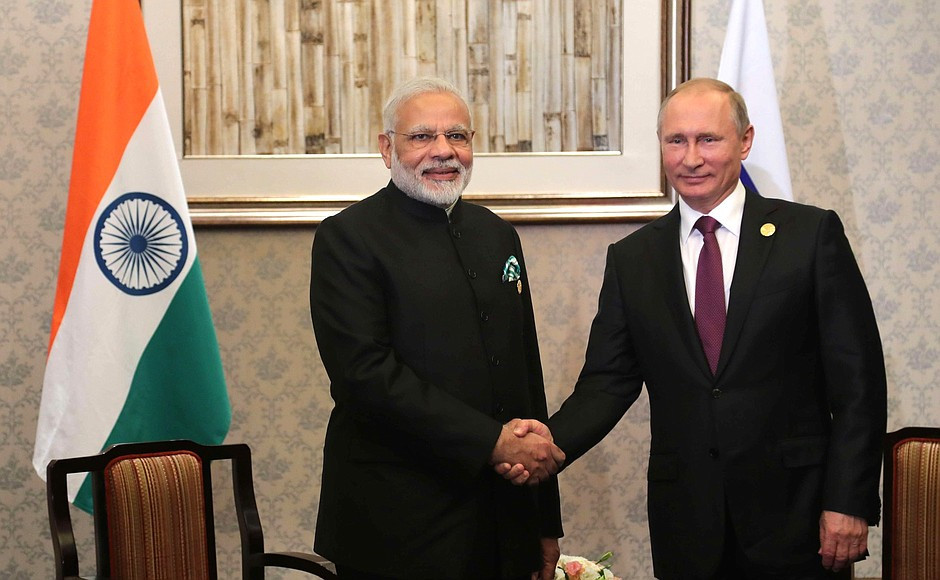 India Russia relations have new challenges after the change in India’s China policy view Chinese aggression in the Ladakh region. Russian Foreign Minister Sergey Lavrov’s public criticism of the Indo-Pacific initiative earlier last month caused a major stir in New Delhi. Lavrov accused the West of pursuing an “aggressive and devious” policy to engage India in “anti-China games.” Expressing Moscow’s opposition to New Delhi’s involvement in the US-led Indo-Pacific initiative, including the Quadrilateral Security Dialogue or Quad, he alleged that the West is attempting to undermine Russia’s close relations with India, suggesting the first time that it can have implications for India-Russia ties. While the Ministry of External Affairs (MEA) rejected Lavrov’s claims, many in policy circles in New Delhi perceived it as not only well-suited but also unceremonious to the longstanding Indo-Russia relations, which has been elevated in 2010 as Special and Privileged Strategic Partnership.

Former Foreign Secretary and former Indian Ambassador to Russia Kanwal Sibal pointed out that, “If Russia is concerned about the U.S. pulling India into its orbit, it should express some public concern about China’s unacceptable territorial aggression against India.” Echoing similar resentment, Harsh V. Pant, Kings College London Professor and Director of Studies and Head of the Strategic Studies Programme at New Delhi based think tank Observer Research Foundation responded, “As India reconfigures its China policy with the Indo-Pacific at its core, India Russia ties won’t be able to escape this strategic reality.” However, later Russian ambassador Nikolay Kudashev said that Russia understands Indian concerns but worried about the Quad. Meanwhile, India and Russia cancelled this year’s annual summit for the first time in two decades. While official statements cited Covid-19 situation as the reason, there is strong speculation about trouble in their bilateral relations given that during the pandemic India has not shied away from taking part in such summits and forums virtually. This article argues that the growing friction in India-Russia relations apparently portends an addition of another layer of complexity to India’s reconfiguring of its China policy.

The public expression of disapproval by speaking the language of Beijing to allege that India is becoming a pawn in the U.S. strategy is flatly dismissive of India’s legitimate security concerns arising from China’s strident pursuit of aggressive territorial claims along India’s China border. In fact, Moscow’s indifference to Beijing’s relentless coercion and aggression against New Delhi naturally runs against the long tradition of friendship between the two countries. This is despite India’s clear expression of its interest in having Russia on board in the U.S.-led framework to maintain a rules-based order in the region. Moreover, New Delhi had on multiple occasions reiterated its commitment to a multilateral and independent pursuit of its foreign policy interests, as further evidenced lately in India’s firm decision to buy Russian arms against the risks of U.S. sanctions.

In that sense, Moscow’s opposition to India’s Indo-Pacific strategy hints at the fact that Moscow likes to see India’s increased alignment with the United States through the prism of competition between two superpowers. However, the fact remains that increasing and unacceptable Chinese aggression in recent years, notably from Doklam to the latest Ladakh crisis, has most importantly forced New Delhi to look beyond the concern of carefully navigating the great power rivalry to the imperative of securing international coordination and support to rein in Beijing from a position of strength. The efforts to this end has primarily come about in the form of New Delhi recasting its strategic outlook in some ways following the strategic logic of strengthening ties with Washington as a potent partner to advance this strategic goal.

Admittedly, India’s increasing activism in the Indo-Pacific initiative markedly stemmed from The Galwan valley clash and the ongoing Ladakh crisis, leading to a major recalibration in India’s China policy. Shortly following the Galwan clash, India deployed its Navy’s frontline warships in the South China Sea – despite the strong objections from China. Amidst the standoff with China, India also signed the Basic Exchange and Cooperation Agreement (BECA), thus singing all the four foundational agreements including LEMOA (logistics exchange agreement), COMCASA (communications security agreement), and CISMOA (Communication and Information Security Memorandum of Agreement) – for the military to military cooperation with the United States.

Likewise, India also entered into a military logistics agreement with Japan, and at the same time, expressed its readiness to sign logistics support agreements with Russia, the United Kingdom, and Vietnam. Further, India’s recent defence deal with Australia and India’s inclusion of the latter for the first time in 13 years in the annual trilateral Malabar naval exercises alongside the United States, and Japan are other significant developments that indicated a shift in the orientation of India’s China policy. Given this, to the extent of Russia becoming oblivious to India’s security concerns on this front means there is a significant differential that is evolving which can harm the existing longstanding healthy and stable Indo-Russia relations.

However, all this may not be just an indication of a misperception from Moscow. Beyond that, it is fair to anticipate a deviation in Moscow’s own priorities regarding strategic interests vis a vis India and China. It should be noted that Moscow’s displeasure with India’s growing ties with Washington on the Indo-Pacific strategies is happening even as the major European powers are all dramatically embracing the Indo-Pacific construct and is eager to become part of the U.S.-led efforts to maintain a peaceful, secure and prosperous region. Further, taking a wide lens to contextualize Moscow’s stably growing ties with Beijing since the Russian annexation of Crimea from Ukraine in 2014 and the subsequent international sanctions on the country, would suggest that Moscow seems to be gradually preparing for a gear shift to move further into China’s embrace as New Delhi continues to drift towards Washington. The two countries have already deepened their relationship based on common shared interest against America, as seen in the case of Iran and Syria in recent times.

As such, Russia’s public statement of this nature may also be warming in some sense to New Delhi that Moscow is increasingly forthcoming in pursuing its strategic stakes in the Indo-Pacific in China’s orbit. If so, the Russian criticism belied India’s strong belief that it can strengthen its ties with the U.S. while still maintaining strong relations with Moscow. Accordingly, it also signals fact that the growing emphasis on Indo-Pacific with deeper engagements between India and the United States is likely to attract Russian attention even if New Delhi tries to maintain good relations with Moscow.

This contextual circumstance, therefore, renders increasing plausibility to suggest that, a possible emergence of China-Russia military alliance cannot be completely ruled out. Nonetheless, for India, this is a typical test of Russia’s friendship which is closely entangled in some fundamental questions that have inevitably come to the fore in the seemingly protracted conflict between India and China. The key questions would be, to what extent Russia is ready to tolerate greater collaboration between India and the United States against China? How far would Moscow be willing to go to trade off its interests with China in order to pursue its interests with India?

These questions highlight the new complexity that New Delhi is going to encounter in playing a greater role to shape her own aspirations and concerns; especially given India’s sense of a power asymmetry with China continues to cause a major worry for the country. So where does it go from here? Inevitably, India will be mindful of Russia’s outwardly articulation of its concerns, yet with Indo-Pacific enterprise continues to make at the centre of India’s reconfigured China policy, New Delhi’s activism alongside close engagements with Washington is here to stay. However it is fair to say, given New Delhi’s massive dependence on Russian arms and weaponry, the new Russian challenge can reinforce the rationale of India walking a fine line between Washington and Moscow. It is therefore important for India to properly recognize and carefully assess this emerging reality and the changing power dynamics to better orient its China policy.