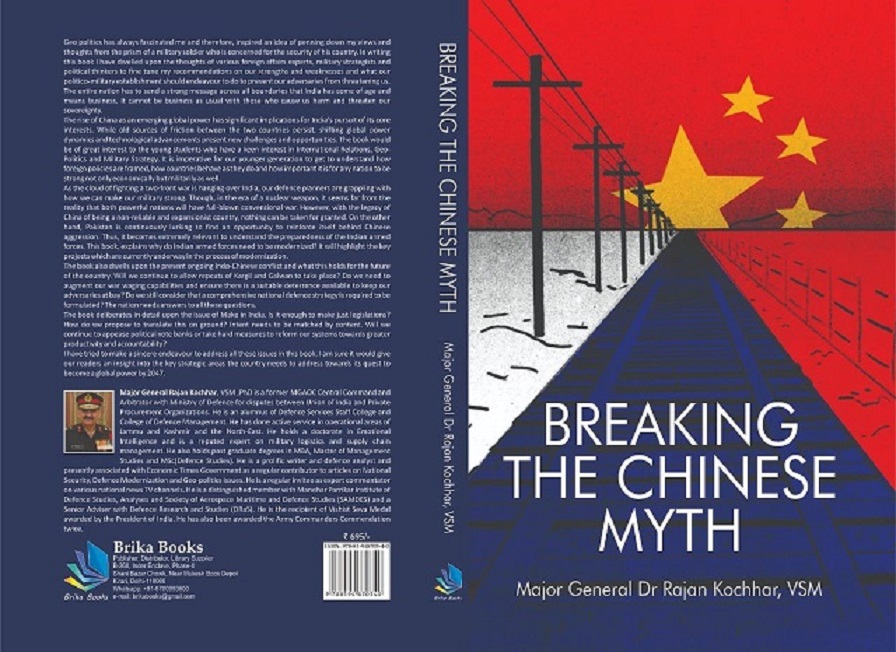 ‘Breaking the Chinese Myth’ is a firsthand account of a soldier who has watched the developments in our neighbourhood in the recent past and is extremely relevant to the present times. The book makes fascinating reading and will add to the learning curve for those who love their country. It also gives an in-depth analysis of the Chinese psyche and India’s counter by a Distinguished General of India.

Maj Gen Rajan Kochhar, VSM (Retd), is a former general of the Indian Army who is known to be an astute professional and a thinker. His articles published in the Economic Times Government, Defence Research and Studies and a host of other journals have made interesting reading. His latest book, “Breaking the Chinese Myth” is an extraordinary piece of writing on current geo-political issues with reference to our belligerent neighbour China and the need for modernisation of our armed forces.

Much has been written recently about the present Indo-Chinese conflict but this book is in a different genre as it uncovers the Chinese Myth and exposes the invincibility of the PLA.

‘Breaking the Chinese Myth’ begins interestingly with the management of our borders and a hostile neighbourhood. The author brings out in a  lucid manner how difficult a task it is for the security forces to manage a diverse border which is manifested with different kinds of terrains and extreme variation in climatic conditions. He brings out the need for getting all the security agencies under a single umbrella namely a “National Border Management Authority”, to ensure a  more coordinated effort and better command and control of all resources to counter border infiltration and smuggling.

The book gives an interesting account of China’s emergence as a global power and its transformation as an economic power of reckoning. The grandiose design of its “One Belt One Road” initiative taking 65 countries along smacks off its expansionist designs. The Chinese Three World’s Theory beautifully explains how  China has endeavoured to unite with other third world countries to counter the influence of the United States and its allies as well as Russia. The key elements of  Chinese foreign policy have been well enunciated and its linkages with the Chinese self-perception brought out. The book lends great insight into how China’s foreign policy has emerged under Xi Jinping with an attempt to remodel the World global order.

An interesting chapter deals with a comparative assessment of the PLA with the Indian Army. This will quite useful to the readers as this chapter is very informative and makes us aware of the latest military acquisitions by the Indian  Army as well as the need to embrace disruptive technologies especially the likes of artificial intelligence, quantum information, big data analytics and cloud computing.  The modernisation of PLA has been explained in detail and the lessons which the  Indian Army can derive to enhance its own effectiveness.

The present Indo-China Conflict has been well covered with all factual details and strategic assessments. The author brings out the requirement to enhance the strike capability of the Mountain Strike Corps to make the Indian Army a potent force to guard the Ladakh sector. A need for re-orientation of our defensive posture and the requirement for a multi-layered ISR system to cover the operational and strategic depth areas have been analysed in detail. Our future relationship with  China has been discussed and the author brings out the all-pervasive need to arrive at an early solution to the LAC claim lines.

An essential chapter deals with the requirement of a comprehensive defence strategy and the author has outlined a concept for its formulation. The threat perceptions, as well as the military preparedness of our adversaries, have been well outlined and explained in sufficient detail. The reality of a two-front threat has been correctly analysed and the need to bolster capability building has been voiced.

In the last chapter of the book, which perhaps should be most relevant to the citizens of the country, is the development of the Indian defence industry and the Make in India initiatives of the Government. The author analyses the efficacy of the various defence reforms announced by the Government and the need for the resuscitation of the Indian Defence Industry. Some very cogent recommendations which are workable and necessary have been given. The Defence Acquisition  Procedure 2020 has been analysed in detail and areas for more emphasis brought out. The book makes very interesting recommendations to further the Make in India programme towards an Atma Nirbharta Bharat.

It is interesting to realise that the entire saga in the present Indo-Chinese conflict has been the superior Indian soldier. The grit, determination and strength of the Indian soldier have stood out. The Chinese have not been able to cope up with the harsh realities of the mountainous terrain. The senior leadership of the PLA has been found lacking at times showing their relative inexperience in strategy formulation and tactical execution. Sun Tzu teaching couldn’t have been more apt to sum things up, “if you know the enemy and know yourself, you need not fear the result of a hundred battles. If you know yourself but not the enemy, for every victory gained you will also suffer a defeat. “If you know neither the enemy nor yourself, you will succumb in every battle.”

The goal of any conflict is to control your opponent and overcome them. Controlling their beliefs about your abilities helps you understand their assumptions and plan a strategy accordingly. Only in knowing your strengths and weaknesses,  as well as those of the enemy, can you begin to form a strategic plan. When you understand these traits, you will be able to assess the likelihood of victory in any circumstance. If victory is not certain, you should not engage in conflict. To know your enemy, you must become your enemy.

The lessons which the Indian Army carries from this conflict will spur them to ensure a higher state of overall defence preparedness towards attaining the vision of Bharat 2047. We can see leaner, efficient and professional armed forces in times to come. The Army of the future will have to be technologically oriented, with many more specialists, as compared to generalists. It will have to be equipped progressively with modern weapons and weapon systems, supported by technology-based processes and automation to meet the needs and challenges of the future battlefield.

The book has been forthright to highlight all the above issues which would merit the attention of the appropriate forums of policymaking in our Government.  The book infuses a sense of a secure future FOR OUR NATION. Counting the strengths and weaknesses the author weaves a strategy that visualises India at 100  years of independence, a country commanding international respect and dignity and also equipped with the strong deterrent capability to any misadventure by its neighbours. Coming from a celebrated soldier it is both credible and reassuring. A  must-read for all who care for India.