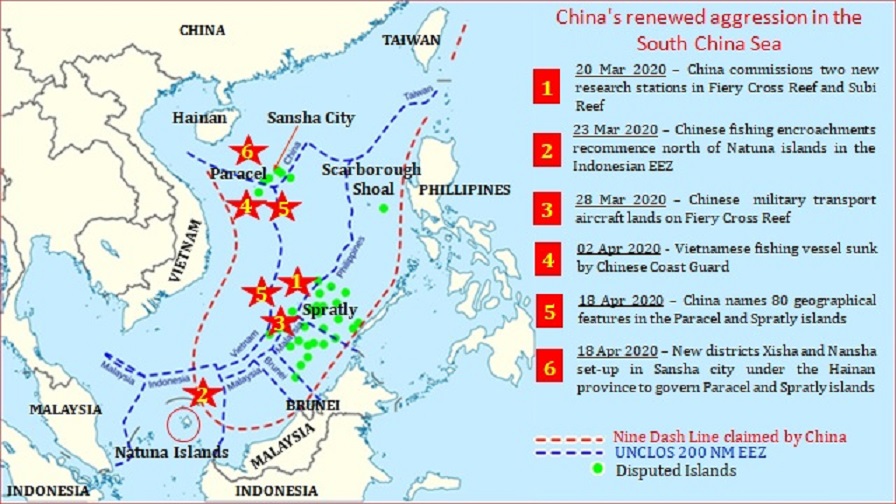 In many circles, questions are asked: Will the People’s Republic of China (PRC) -the largest world economy in PPP term and the second-largest economy in dollar term and second strongest military power in a conventional military sense- retreat from its claimed occupation of resource-rich 3.5 million Sq KM South China Sea, which it claims as part of its sovereign territory based on some self-developed but disputed historical evidence, due to pressure from world powers?

SCS is one of the largest marginal seas in the world, which provides passage to one-third of world shipping involving the world major powers and economies and 10 member ASEAN countries which are now fast-growing to be the workshops of the world.

In the meanwhile, China has invested a huge amount in building military infrastructures in some of the sea’s uninhabited natural isles, and also built artificial isles to carry forward economic exploitation of the sea at a great cost of sea’s ecology, and militarily overlooking littoral countries claims as per the United Nation Convention on the Laws of the Sea (UNCLOS).

In 2016, Beijing rejected the International Court of Arbitration verdict in favour of the Philippines over the latter’s claim on the sea’s reefs and shoals, part of her Exclusive Economic Zone(EEC), and has been routinely sabre-rattling littoral countries and their nationals when they venture into the sea for economic activities. Besides, in 2020, PRC has released a draft law to empower the country’s Coast Guard to use military kind force to defend Chinese-claimed waters and territories. The proposed law has scope to be applied in the disputed South China Sea.

The kind of claims and forces China uses to establish its sovereignty over the vast water body surrounded by several countries -economically and militarily weak compare to China- has been experienced for the first time not only in the Indo-Pacific region but also in the human civilization’s living memory.

And a major concern is: Silence over China’s claim will lead to the creation of a precedent that will have a tremendous negative impact on small and poor countries’ economies, and possibly maybe another source of conflict among countries, unheard of before.

Communist China since its establishment in 1949 has earned a reputation of forceful encroachments, and in many cases, retreated over border issues with neighbours such as Soviet Russia in 1969, Vietnam in 1979, and now on Himalaya height on India’s LAC. Of course, Soviet Russia then was more powerful in the conventional and non-conventional military compared to China. But in the case of the military conflict with Vietnam in 1979, much weaker Vietnam forced China to retreat in an intensive war that lasted for three weeks and six days.

In May 2020, post-winter, China’s People’s Liberation Army (PLA) intruded into buffer zones on the Indo-China Line of Actual Control (LAC) on the uninhabited Hamalaya’s Ladakh region as part of its land grabbing policy of “grab what you can get and then try and grab some more” accompanied by bluff and bluster in which the Chinese Communist government is ill-famous for.

Following the intrusions, a bloody physical skirmish took place between the PLA and Indian Army on June 14-15 intervening night in Galwan Valley in which later lost 19 soldiers and one commanding officer while the actual number of causalities from PLA has not yet been disclosed by China for reason best known to its leadership though non-Chinese sources put the numbers somewhere between 35 to 70.

But the subsequent resolute resistance from the Indian military and political leadership so far forced the PLA to withdraw from two major friction points such as Pangong Tso lake north bank in February 2021 and Gogra-Hot Spring in August 2021 out of five intrusions. The latest withdrawal happened despite Chinese official bravado post-Pangong Tso withdrawal that India should not expect any more PLA withdrawal.

From the above discussions, this author believes that a united persistent economic, military and diplomatic resistance of littoral countries of SCS and their allies may yield a reluctant retreat of China from the contested sea without a war, benefiting a large number of small and weak countries.

Already works to resist China started by all who matter. For examples:

On the economic front, many developed countries-based MNCs have started shifting their labour-intensive manufacturing bases -the backbone of Chinese Economic growth- to other countries in South Asia and have started outsourcing the supply chain from other countries as much as possible. The German-led European Union(EU)’s Comprehensive Investment Agreement(CIA) with China negotiated and concluded -after seven years and 35 rounds of negotiations’ no-progress- in December 2020 has been suspended by EU Lawmakers. Apart from the above, the trade war started during the US President Donald Trump administration between two leading world economies having a tremendous negative impact on export-oriented China Economy has been so far retained by his successor Joe Biden who has taken an oath of office in January 2021.

On the military front, Quadrilateral Security Dialogue(QUAD) member countries (US, India, Japan, and Australia) have started regular naval exercises involving their aircraft carriers, frigates, and destroyers in the Indo-Pacific to build strategic skills of interoperability despite oblique criticism from China and her present opaque ally Russia.

Apart from the above, the US warships have been regularly crisscrossing the contested sea, visiting SCS’s littoral countries, and doing port calls. After moving through SCS, a British nuclear-powered submarine accompanying the HMS Queen Elizabeth aircraft carrier has made a port-call to Busan in South Korea. And on August 02, the German navy frigate “Bayern” set sail for the Indo-Pacific.  The first such deployment in almost 20 years is meant to uphold Freedom of Navigation(FONOP) in international waters, protect “open societies” and express support for regional partners sharing Germany’s values, DM Annegret Kramp-Karrenbauer said in a statement.

On the diplomatic front, PM Narendra Modi let the world know on July 06 that he had personally wished Tibet’s spiritual leader Dalai Lama a happy 86th birthday in a phone call, disregarding any potential disapproval from China. Beijing regards the Dalai Lama as a dangerous “splittist”, or separatist, and frowns on any engagement with him.

Japan PM called Taiwan a ‘country’ instead of ‘region’, breaking an ongoing practice that has been there since Tokyo cut off diplomatic relations with Taiwan in 1972, and an annual Japanese defence white paper in mid-July 2021 calls Taiwan important to domestic and international security for the first time, and it adds that “it is necessary that [Japan] pay close attention to the situation with a sense of crisis more than ever before.” Taiwan’s de facto ambassador in Joe Biden-Kamala Harris’s oath-taking sends a strong diplomatic signal to belligerent Xi Jinping.

Among the littoral countries the major victims of Xi Jinping aggression, the Philippines after long hesitation renewed the 1998’s Visiting Force Agreement(VFA) with the US after a meeting with the new US Defense Secretary Lloyd Austin that would let US forces operate from its soil. On August 03, the U.S. Secretary of State Antony Blinken announced alongside Indonesia Foreign Minister Retno Marsudi in Washington the launch of a “strategic dialogue” with Indonesia, and committed to working together on issues that include defending Freedom of Navigation in the South China Sea.

According to a Chinese military magazine, Vietnam is building up its maritime militia in the South China Sea in an apparent challenge to Chinese efforts to dominate the disputed waterway. QUAD connections to which Vietnam has shown interest “will give Vietnam a solid regional ‘coalition’ to work on China with,” said Yun Sun, East Asia Program senior associate at the Stimson Center in Washington. “For a Vietnam that has been resisting China alone for centuries, to have those solid partners will improve Vietnam’s leverage and position,” she said.

Therefore, this author thinks that let us persist with the above strategy. Given determined resistance, the Indo-Pacific region in particular and the entire world, in general, may run into another spell of punishing Cold War as seen in the second part of last century and a short period of economic stagnation because of China’s last three decades of domination in world supply chain as forecasted by former Chinese speaking Australian PM Kevin Rudd (2007-10), who withdrew Australia from QUAD alleging ‘the region can’t afford another Cold War’,  though he recently joins the bandwagon of opposing China aggression. But, the punishing Cold War is preferred over the unbridled aggression of an autocratic communist regime, which is now found brain behind and strength of many autocratic regimes worldwide. In the above endeavour, there is the scope of bringing China to the arc of democracy in which the US and Western Democracies have failed though they integrated world economy with China in the 1970s and President Bill Clinton advocated China enrolment in the World Trade Organisation(WTO) in 2001 with some hope. 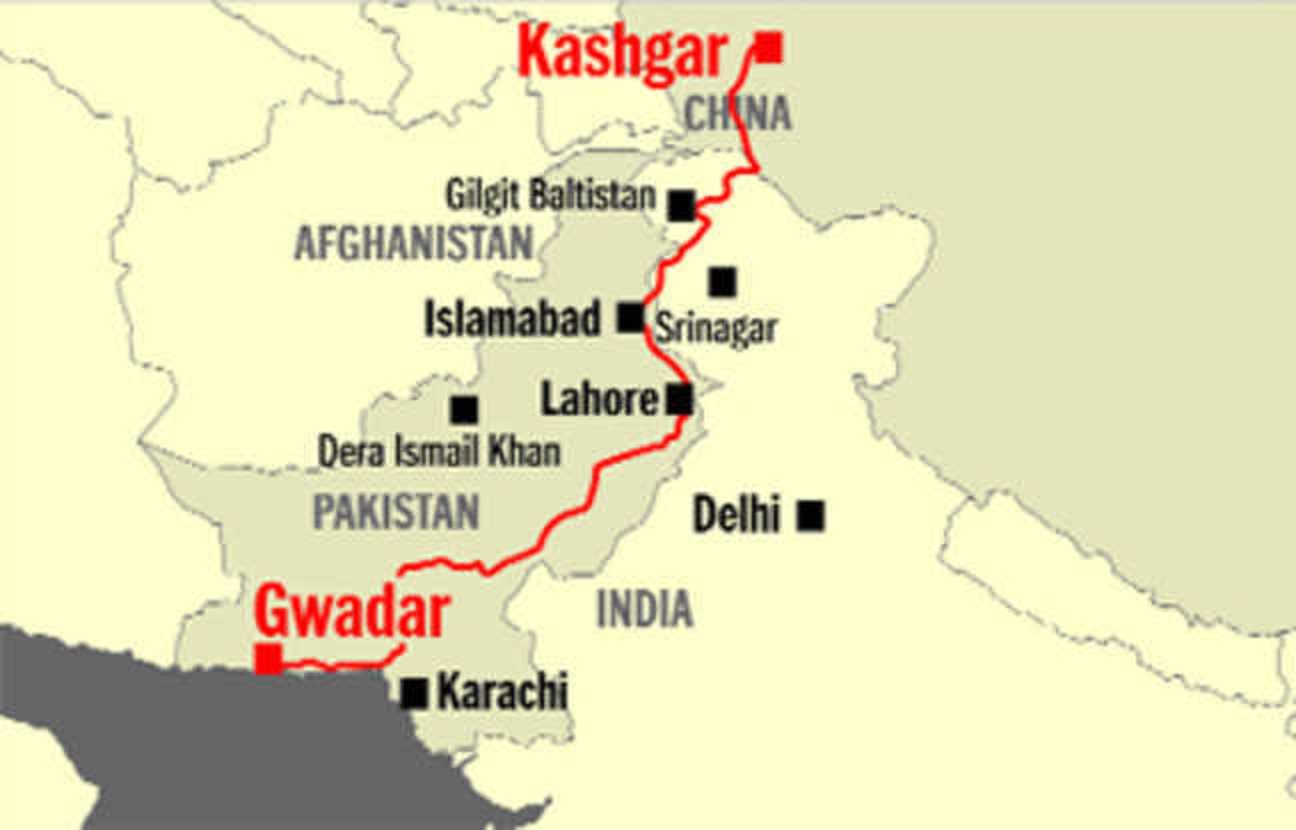