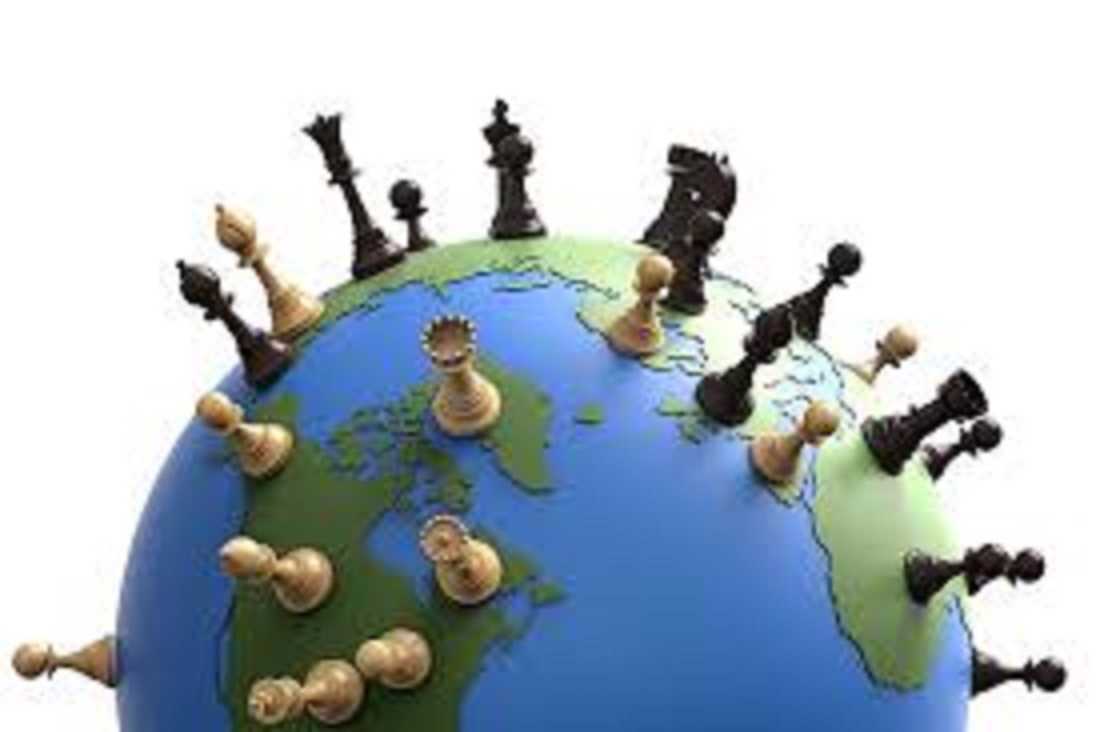 Geopolitical threats being faced by India is a big challenge for the nation and its people.

The year 2020 has been a turbulent year for mankind in living memory. The massive deaths the China virus unleashed on the mankind and the gruesome pictures and footage of the humans, labouring to breathe and dying gasping for breath and in pain due to the China virus, has left an irreparable scar on human minds.  India has not been untouched by this pandemic either.  We have lost around 1,50,000 human beings to this pandemic.  Irony died a thousand deaths when China resisted any attempts to investigate the origin of the virus by inviting a sham probe to investigate the source of the virus thus giving conspiracy theorists enough material to spin a theory that this virus could be bio-engineered.  Whether this is true or not, the fact is, China hid the information of this virus in conjunction with Dr Tedros Adhanom Ghebreyesus, the World Health Organisation Director-General, from the world is a crime against humanity in itself.  Mr Nitin Gadkari had once spoken that he believes that this virus may have been bio-engineered.  China merrily allowed flights to all across the globe and thus the whole globe got afflicted with this China virus.

India was already mired in an economic crisis due to flawed planning and this pandemic aggravated an already poor-performing economy to an extent that it pushed India back by a decade at least, if not more.  The lockdown implemented across the country led to the mass migration of daily wage workers who are the wheels of the Indian economy.

Come April/May 2020 and it was detected that PLA (People’s Liberation Army) had transgressed into the Indian side of LAC (Line of Actual Control).  There were videos of PLA and Border Guards clashing with ITBP and Indian Army at multiple friction points with Indian troops bashing the hell out of the PLA/Border Guards. And then, when the first Corps Commander level meeting took place, it was “mutually accepted” that troops from both sides should withdraw to the mutually accepted pre-designated patrol points (PPs).  In June 2020, when Indian troops went to verify the Chinese withdrawal just beyond Galwan Valley, PLA armed with medieval age weapons attacked the verifying patrol party.  It is reported that the fighting was fierce and the Indian soldiers’ bodies were badly mutilated in the ensuing fight and in some cases, the identification of the dead soldiers was only possible after cross-verifying the personnel with their dental records.  In all, 31 people including the commanding officer were murdered by PLA.  PLA also suffered massive casualties, but they chose not to disclose their casualties.  Speculations were rife that they suffered 100 plus casualties and for anyone who understands Indian Armed Forces and the mechanism of functioning, it should not be a shocking number at all.  However, China cares two hoots for its’ dead PLA soldiers.  China may have ended up achieving its strategic objective which is to keep India preoccupied with LoC/LAC with Pakistan and China, thereby limiting its growth potential.  In the post-World War II China, Mao Zedong’s obsession with the revolution led to millions of Chinese dying of malnutrition.

There are two schools of thoughts here:  one is that China wants India to “behave” and accept CPEC (China Pakistan Economic Corridor) since the CPEC runs through the strategic Karakoram Pass which is in Indian territory.  Post the abrogation of Article 370 by the Govt. of India, alarm bells were rung in the Pakistani establishment as well as the Chinese circles about India planning to “recover it’s a territory by force if required”, even if it meant India fighting a two-front war and the idea of two-front conventional war was indeed being debated in the military circles over the past decade.

A second thought is that CPC (Communist Party of China) is facing dissent from within, given that Chinese President Xi Jinping is slowly trying to take control over the functioning of the party and the country as a whole and cover-up his poor handling of the pandemic.  Dissenters are either in jail or face the firing squad or have their organs harvested pre or post their executions.  Dissent was growing tremendously amongst the CPC that Xi Jinping found it very difficult to control and hence, this transgression was a “welcome step” to divert the public perception from CPC over to LAC.  It may interest the readers to note that China has territorial disputes with all the countries surrounding it except Russia.  Around this time, Xi Jinping gave a clarion call that “China will break up into pieces like USSR if there is no unity amongst the CPC members” and was able to successfully divert the public attention from the pandemic and the dissent.  There were reports that China has gravely underreported its deaths due to China virus while their wolf-warriors were all over the social and electronic media claiming China was able to successfully contain the virus and that people are now moving around without masks and celebrating and enjoying life as they did in the pre-pandemic era.

China also successfully coaxed Nepal to provoke India with a non-existent border dispute of an area named Kalapani.  The irony is that residents of Kalapani call themselves Indians proudly and nearly every household in that territory contributes to nation-building by sending family members to the Indian Armed Forces and paramilitary forces.  While China was coaxing Nepal to provoke India, it conveniently usurped Nepal’s territory in the Lapcha area by destroying Nepalese landmarks and constructing Chinese landmarks and 11 cement buildings through a technique known in military parlance as salami slicing.

For those who have studied Northeast insurgency in detail, it won’t be a surprise that China has armed, funded and even harboured some of the most notorious terrorists in Northeast India.  Paresh Baruah, the de facto leader of ULFA (I) is speculated to be living in Yunnan province.

The CFVs (ceasefire violations) by Pakistan continue unabated.  Indian security forces adopted a multi-pronged strategy to contain and neutralise the terrorists before they move to attack the security forces.  The fragile democracy of Pakistan totally mandated by the Pakistan Army has been impotent always as it is the Pakistan Army which calls the shots on foreign policy and India.  Pakistan Army owes its very existence to its anti-India stance.  China recently conducted joint air exercises with Pakistan Air Force and People’s Liberation Army Air Force, Shaheen-IX close to the Indian border in an attempt to provoke India whilst arming the proxies of mujahedeen.  There are reports that ‘hawala’ network in India which is managed by handlers in Pakistan has also seen increased activity and security agencies were quick to detect a Chinese connection to it as well.  Recently, a Chinese national was arrested for running a ‘hawala’ racket in Delhi. Two Chinese nationals amongst others have also been arrested in the easy Loan Frauds which saw high activity online in very recent past.

It is to be noted that India has offered red -carpet welcome to manufacturing companies wanting to move their manufacturing units from China to India.  Some Chief Ministers also offered sops to the manufacturing industries to enable them to start their business in India.  India’s biggest advantage is its’ young population, thereby giving the manufacturing industry a shot in the arm both in terms of manpower as well as business potential.  China is superior to India technologically, but India has a lot of potentials and a burgeoning middle class willing to spend money.

Banning the “Apps” will be a temporary fix to the problem and not a permanent solution.  It would be wise if the Working Mechanism for Consultation & Coordination starts confronting China with a military adviser on board since Chinese are known to either maintain a stoic silence during the Corps Commander meetings or make a loud claim justifying the transgression and in some cases, they have pleaded for a face-saver.  What is more mystifying is that ‘salami-slicing’ is a part of the promotion criteria in PLA; the bigger the area, the better chances of a promotion.  It is imperative that ITBP should be reporting and be under the command of the Army instead of the Ministry of Home Affairs while being posted on the LAC/McMahon Line.

Military wise, Indian Army by the sheer sagacity and bravery is mighty enough to give the Chinese a bloody nose in case of hostilities.  But the moot question is, are our politicians mature enough to understand the importance of national security policy?  That, as per me is the biggest geopolitical jinx.  Budget allocation for Defence Services is at it’s lowest since 1962 when there is an immediate need for modernisation of the Armed Forces to equip the soldier and arm him to the teeth.  With our country in perpetual election mode and rallies across India, we do not have a vision for National Security.

It can only be termed an irony if people don’t remember the name of the Commanding Officer who died gallantly fighting in Galwan as opposed to an actor who committed suicide around that time.  People were glued to their television sets, keen to know about the updates on the probe into the actor’s suicide rather than curious to know the Indian response to China’s aggression.  Every other day, there is unfortunate news of a soldier killed in action in the line of duty.  The clarion call by Prime Minister for Atmanirbhar Bharat is very essential so that the dependency on imported goods, especially Chinese, is avoided.  The two hostile nations surrounding India will make every attempt in the book to destabilise India, as an unstable India is in their best interests.  The citizens of India should realise that it is not about your own self, but also about National Pride, National Security and they too are a critical part of it.

To conclude, let me quote Chanakya:  Time (opportunity) approaches a man desirous of it, only once. And will not come a second time when he wants to do his work.