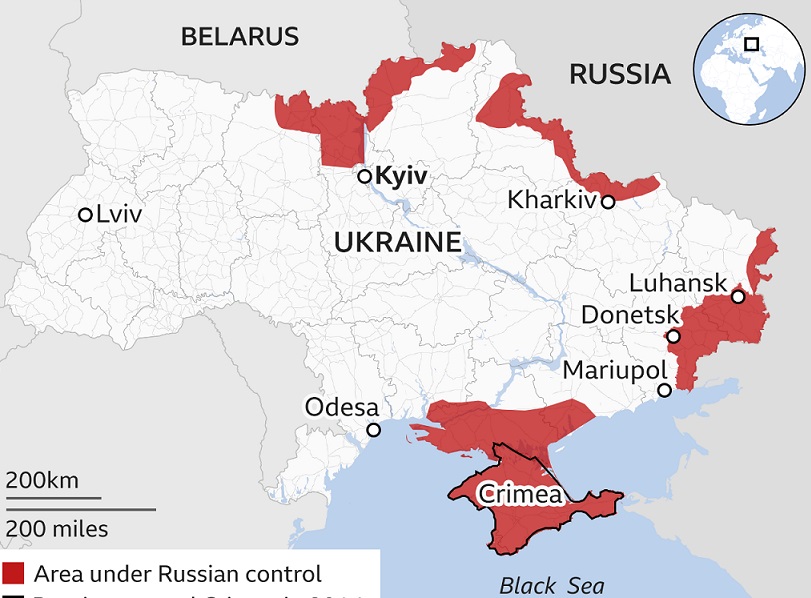 Finally, Vladimir Putin’s giant Russia waged war on Ukraine, a former Soviet Union (SU) republic with one-tenth of the Russian defence budget, ending month’s long diplomatic efforts to settle the conflict between the two without war, and speculation based on the US’s intelligence that Russian invasion was a matter of days. “Historians will debate whether the Russian war on Ukraine could have been averted had Biden addressed Moscow’s legitimate security concerns about Ukraine becoming a US-NATO frontline bastion against Russia,” opines the strategic expert Prof. Brahma Chellaney.

The East European nation was made sovereign nation post-Communist ruled SU balkanization in 1991 followed by the abolition of Warsaw Pact but mostly was under the rule of pro-Moscow leadership till 2019. On the very first day of the war, it has been clear that the aggressor is going to win the war as other nations, so far had been with Ukraine giving supporting statements, not forthwith for physical intervention on behalf of the victim, forgets about the consequence the aggressor will encounter in near and distant future due to Western and developed nations’ choreographed economic sanctions as per their threatens before the war.

The US and European Union (EU) have been very generous in implementing sanctions forthwith on the very day of war commencement. This is the maximum they can do despite the looming energy crisis the EU countries, in particular, will face if Russia imposes a ban on gas supply as a retaliatory measure for economic sanctions. EU countries source 40% of their natural gas requirements from Russia.

Putin’s Russia is going to implement its long-desired sanitization of Ukraine’s own and North Atlantic Treaty Organization (NATO)’s military supports apart from its anti-political elements in victim’s territory, and might balkanize victim’s geography in such a manner and type that it will never rise to disobey big-brother Russia, and will never wish to entertain NATO’s interest for long for whatsoever reasons as has been seen in Georgia since 2008 post-Russia-Georgia war.

The US and its allies’ poor understanding of ground reality are now very clearly visible, and they are found not that pragmatic. Before the just launched war, they literally forced Russia to join the China camp, might be they have underestimated Russian present leadership’s confidence in the country’s military prowess, and its leadership’s determination to retain Soviet-era sphere-of-influence. And, on the other hand, it looks like the US’s Biden Administration has not yet fully comprehended EU’s energy hunger and economic and supply chain dependence on People’s Republic of China (PRC), the world’s manufacturing hub, and at present an ally of aggressor Putin’s Russia.

But, what is next as a consequence of the ongoing Ukraine-Russia war is the most critical and furious for the planet’s geopolitics, and its peace and stability. It is none other than the aggression of PRC in her already designated sphere of influence around her all directions of borders. And she has by now in the virtual occupation of South China Sea and denies the sea’s littoral countries to utilize the sea’s resources, they have been enjoying for centuries, disobeying established international order in the form of the United Nation Convention for the Law of the Seas (UNCLOS). PRC or China has already got less genuine and largely self-manufactured border disputes -mainly based on unrecognized and unsubstantial historical facts- with her all neighbours. And already announced that the island nation Republic of China (ROC), a little more than a hundred kilometres away from her east coast, is a renegade territory of China, and vowed to merge the same by force if so required. Apart from the above, soon after Xi Jinping was coroneted as General Secretary of the Communist Party of China and Chairman of the Central Military Commission in 2012, PRC Foreign Affairs Minister Wang Yi told his counterparts in ASEAN countries, which are too littoral countries of SCS, that they are small countries compare to PRC. Should this statement not be interpreted that PRC wants to tell ASEAN overtly that they are part of the Chinese sphere of influence? In the recent past, the Chinese spokesman has gone to the extent of threatening Australia and Japan with N-Warheads missiles attacks as they questioned the Middle Kingdom’s secrecy over Covid19 origin and trade policies violating international norms. And the People’s Liberation Army (PLA) is already there on India’s northern border with full war-gears after hosting a bloody skirmish with the Indian Army while attempting to grab Indian Territory in 2020 throwing year-long agreements into Pangong Tso Lake signed between two countries to maintain peace on the Line of Actual Control (LAC).

Before Putin finally waged war against Ukraine, he has a one-to-one summit meeting with Chinese paramount leader Xi Jinping in Beijing on the occasion of the Winter Olympic inauguration ceremony. Long ago, Putin has expressed his unhappiness over the disintegration of the Soviet Union in the early 1990s. And he certainly wants Russia should get back the former Soviet Republics -now sovereigns- under her sphere of influence, if not the kind of strategic alliances the NATO member countries have with the US. Day after the launch of the ongoing Ukraine attack, Russian Foreign Ministry spokesman Maria Zakharova warned of “serious military and political repercussion” if Finland, located on the western border of the Russian Federation, joins NATO.

What has transacted between Putin and Xi Jinping, the two supreme leaders of two strong military powers of the world with highly dictatorial tendencies is not known to the outside world. If you-attack-Ukraine-I-will-attack-Taiwan has been in principle decided among them ignoring for time-being old border dispute between two large neighbours, then an attack on Taiwan in near future may not be ruled out.

Let us think in the event of the latest possibility -as feared above by this author- getting grounded, what will be the shape of world geopolitics, and consequences to world peace and stability?

It is certain that without external force’s physical intervention, Taiwan cannot survive the giant China invasion, which has a military budget twenty times bigger than her. And so far no power including superpower America has got precise defence infrastructure in the island nation to rescue it from an instant attack like the US has in neighbouring South Korea, Japan, etc. in addition to strategic treaties with the latter two. So far what has been demonstrated are passages of naval battle gears in the Taiwan street to establish Freedom of Navigation and a statement from the US General that their defence forces can come to rescue the tiny island nation in the event of an attack from China within a short period of time if the administration so desire. Nothing concrete there. The 1978 US’s Taiwan Relation Act does not specify what kind of response Washington will wield in the event of Chinese aggression to occupy her narrated renegade territory that is the Republic of China (ROC) nicknamed Taiwan. Once Taiwan is occupied, the US image of protector of the democratic world will be thrown to the Pacific Ocean forever as Communist China’s present leadership which is determined to build modern military power to fight and win the war anywhere in the world by the PRC formation’s centenary in 2049. And China is progressively building its military prowess to achieve this ability.

Now, China President Xi Jinping, who has self-coroneted him with Paramount Leader status –so far only Mao Zedong, the founder of PRC, had this status-, got his candidate-specific constitutional amendment to remain in power for life. Similarly, Russian Federation President Vladimir Putin following Chinese leader got his candidate-specific constitutional amendment.

In view of the concerns discussed above, all concerns are earnestly advised to forget Ukraine and now concentrate to save democratic Taiwan from lurking danger from China in the Indo-Pacific region.