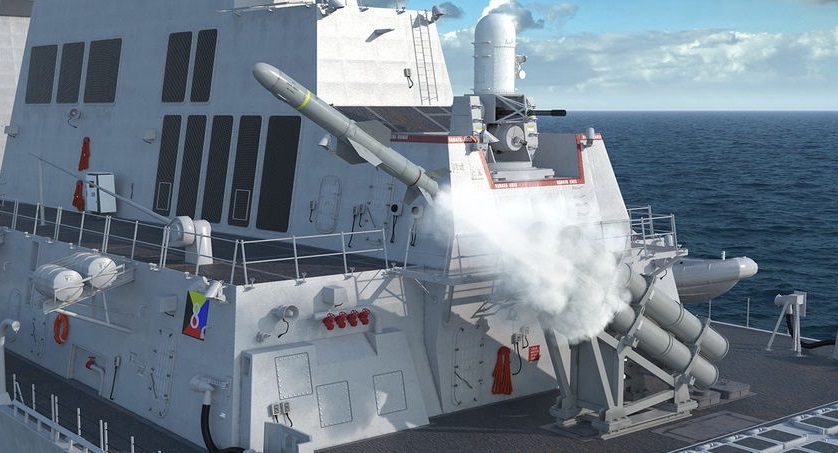 Selection of weapons system and configuration onboard ships is an important facet of warship design. The ideal situation would be to fit the system onboard the platform and undertake trials to evaluate platform effectiveness and survivability.

However, ship build procedure and the obvious constraints of physical availability of systems under development, installation and integration with other systems makes it difficult to replicate the operational environment and range of scenarios in which the system is expected to operate. It is also obvious that undertaking actual trials in realistic scenarios are expensive and fraught with risk.

The key to evaluating the efficacy of weapon systems is data. Though most navies regularly undertake live firings to train crew and evaluate weapon systems, the data is seldom shared. It is classified data and so for obvious reasons navies do not like to disclose. Combat data to evaluate system effectiveness is grossly inadequate. Just to give an example, in the case of Surface to Air Missile (SAM) engagements against Anti-Ship Cruise Missiles (ASCM) in combat, there are only two recorded cases. The first case was HMS Gloucester, using its Sea Dart system, shooting down a Silkworm missile launched at the USS Missouri during Persian Gulf War (1990-1991). The second case was the attack on USS Mason in Oct 2016, when two SM2 and 1 ESSM were launched against 2 silkworm missiles, in addition to softkill measures (Nulka decoys). All SAMs were launched for the first time against actual threat since development.

To overcome this limitation, most navies’ world over, fall back on simulation studies during the acquisition of major warships to enable decision-makers with the tools necessary to determine the existence and extent of potential gaps in capability without engaging in actual conflicts. The effectiveness and total cost of competing concepts for new weapons systems can be determined without creating prototypes and testing them in the field. Modelling & Simulation (M&S) is an excellent tool, which provides insights into the behaviour of proposed systems and capabilities that are challenging and expensive to evaluate through operational testing. This type of analytical study is useful when performing design trade-offs for real estate allocation, firepower capability and balancing the conflict between defensive and offensive capability. M&S study will influence the allocation of additional resources that may be needed to bridge the capability and uncertainty gaps that exists regarding the effectiveness of current and future defensive missile systems against the Anti-Ship Cruise Missiles (ASCM) threat. Such models range from the high-resolution naval combat model to the aggregated campaign model to answer questions related to surface combatant air defence.

We will examine the M&S options available with particular reference to Anti-Missile Defence Systems.

Since the first use of the ASCM by the Egyptians in Oct 67, the use of missiles has been a constant in the naval battlefield space. Since then further technological advancements in aerodynamics, electronics and propulsion systems have spawned a vast number of new missiles, which are more reliable, intelligent with smaller Radar Cross Section (RCS), fly sea-skimming altitudes, are highly manoeuvrable with superior seekers for better target detection and discrimination. The influx of supersonic missiles today and hypersonic missiles in the near future will further make the surface ship more vulnerable. On the other hand, there have been significant developments to counter the ASCM with Surface to Air Missile Systems (SAM) and soft kill weapons. These include improvements to sensors to enable early detection, classification and tracking of threats and networking of sensors to enhance situational awareness. Air Defence weapons have been enhanced with greater range, better guidance, and terminal homing capability. In addition, tactical measures like mutual support and expanding the number of defence layers with Long Range Surface to Air Missile (LRSAM), Short Range Surface to Air Missile (SRSAMS) and Close-in Weapon System (CIWS) missile/gun systems and employment of softkill measure are employed to ensure that the probability of hit of the ASCM is reduced.

Developing a model for Anti-ship missile defence is a major challenge. It is a complex problem for the developer to design and create a model to realistically replicate the system capabilities to assess the efficacy of weapon systems. To determine the validity and consistency of the model, there is a need to conduct extensive simulations by constantly varying the parameters to refine the model behaviour so that the results are aligned with real-world expectations. Maintaining records of the runs and comparing with real results, once the asset is tested and put into service, assists fine-tuning and validation of the modelling and analysis.

To study this complex problem both at the individual ship level and multi-ship formation, a number of models are available. While there are a number of commercially available software, a few also been developed by students at the US Naval Postgraduate School Monterey, as part of their thesis to analyse the air defence effectiveness of systems. These models will be discussed in Part 2 of this paper.

In the Indian naval context, the selection of weapon systems, a complex project management function, involves the interaction of the Directorate of Staff Requirements with the technical directorates and Naval Design directorate. There is also interaction with weapon system contractors and shipbuilders. After a long process of iterations, the preliminary staff requirements finally evolve as Naval Staff Qualitative Requirements to define the final design for the ship. Thus far, we have been relying on the rule of thumb, historical precedence, or application of heuristic techniques, rather than using a mathematical procedure in defining our estimates.

Some of the questions, which need to be examined in an AAW scenario are:-

While naval officers are extremely proficient in handling combat operations and maintenance of systems, the lack of exposure to weapon system design and development engenders gaps in their understanding and application of the right tools for evaluation. This is particularly relevant for decision-making directorates of the Indian Navy. Decision-makers must be able to envision future combat situations, conceptualize new weapons systems, and evaluate their performance and manufacturability in a way that carries less risk, is quicker, and is less expensive.

One method to overcome this limitation is by a consultative process involving external Subject Matter Experts (SME) who have domain expertise in areas such sensors, weapons, systems design & integration, combat management systems and shipbuilding by bringing invaluable inputs for decision making.

Another aspect which could improve the process is the application of Operational Research (OR) techniques and M&S to resolve conflicting capability requirements. However, this subject has not found any traction in our approach to weaponizing ships during shipbuilding or modernisation drives, when compared with other navies like the US[1], UK and even Australia. While the underwater hull and ship stability is tested with scale models and Radio Frequency radiation pattern is mapped for antenna location, the effectiveness of the weapon systems is not modelled to give an objective assessment. This type of study is useful when quantifying overall performance and may identify where a key subsystem reaches its operational limit. It is also an extremely useful tool to analytically assess the measure of the effectiveness of an updated platform when weapon systems are replaced or upgraded during the modernisation of platforms.

In view of the above, there is also a requirement to integrate M&S into the systems acquisition process prior to the finalising the Naval Staff Quality Requirements (NSQRs). The following are recommended:-

To overcome the limitations of testing weapon system effectiveness onboard ships with expensive field trials particularly for new weapons systems the use of M&S needs to be exploited. The use M&S to support, among other things, concept formation and evaluation, architecture development, specification, detailed design, risk analysis, provision for support in the field, life-cycle costing, and disposal is a step in the right direction. This tool will empower decision-makers to determine the existence and extent of potential gaps in capability without engaging in actual conflicts and also provide insights into the behaviour of proposed systems and capabilities that are challenging and expensive to evaluate through operational testing.