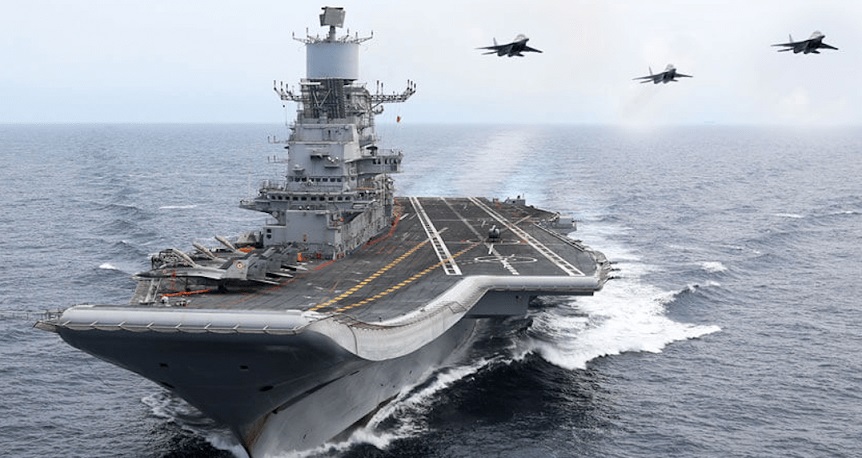 One of NIIO’s agency i.e. Naval Technology Acceleration Council (N-TAC) “will bring together the twin aspects of innovation and indigenisation and provide apex level directives” and a working group under it will implement the projects. The Technology Development Acceleration Cell (TDAC), under the N-TAC, is specifically meant for “induction of emerging disruptive technology in an accelerated time frame”.4

Another noteworthy feature of the above architecture is signing of MoUs by the Indian Navy with four agencies i.e. (a) Uttar Pradesh Expressway Industrial Development Authority (UPEIDA), and an official statement quoted Uttar Pradesh Chief Minister Yogi Adityanath saying “With this MOU, the Indian Navy will find solutions of its problems with the help of Centre of Excellence being established in the Defence corridor of UP”; 5 (b) Maker Village, Kochi; (c) the Society of Indian Defence Manufacturers (SIDM); and (d) the Raksha Shakti University (RSU), Gujarat. Professor Bimal Patel, the Director-General of RSU has observed that the MoU with the Indian Navy would trigger “innovations in the security space”, augment capabilities of Indian Navy through “incubation assistance to the entrepreneurial start-ups” and the “joint research projects and residential training programs for Indian Navy officers” would be for capacity building of the force.6 The Maritime Innovation Forum (MIF) of the Security and Scientific-Technical Research Agency- SASTRA7 would be spearheaded by the RSU and serve as an “online discussion forum for engaging domestic industry and academic institutes”.

‘Self-reliance’, ‘indigenisation’ and ‘Make in India’ have been the mantra of the Indian Navy for over five decades. The Indian Navy has on regular basis issued guideline document such as the 2008 “Indigenisation Plan for the period 2008-2022” which are a reflection of its sophisticated long term planning.8 These also showcase its achievements in the ‘design and development’ of many warships and construction of both conventional and nuclear-propelled submarines in Indian shipyards. The current Indian Navy Indigenisation Plan (INIP) 2015-2030 makes reference to Fourth Industrial Revolution (4IR) technology-enabled systems, devices and platforms and calls for “a need to infuse state-of-the-art technologies in partnership with the Indian industry and prepare our human capital to optimally exploit them to generate maximum combat power”.9

The Indian Navy’s 4IR roadmap is at two levels. First, is the collaborative agreements and arrangement with the laboratories for futuristic technologies under the Defence Research and Development Organisation (DRDO); Council of Scientific and Industrial Research (CSIR); projects through Public Sector Undertakings (PSUs); Indian industry; academia such as the NSTL – Academia Meet on Artificial Intelligence for Naval Systems etc. At the second level, the Indian Navy has set up a ‘state-of-the-art’ Virtual Reality Centre (VRC) at the Directorate of Naval Design (Surface Ship Group), and under the ‘IN – AI Roadmap’ it envisages leveraging AI to “enhance the combat edge by imbibing it in operations, maintenance as well as logistics, and further into support verticals, such as physical security, medical diagnostics etc.”10.

While these are impressive initiatives, the Indian Navy must also pursue setting up additional infrastructure to enable it to fully exploit the 4IR technologies that are causing major disruptions in naval affairs across the globe. First, data storage; it is estimated that internet of things (IoT) devices generate 1 billion GB of data every day and by 2025, there would be 42 billion IoT-connected devices globally.11 This would have to be stored in special storages called Data Centre which would necessarily be physically safe, resistant to seismic activity, flooding, cyber hardened and should be such that these can be expanded. The Data Centre generate enormous amount of heat and require high quality cooling systems and current trends are these are being set up underwater or in the Arctic Circle. The Indian Navy requires secure and robust high-end Naval Data storage infrastructure to enable seamless data-sharing between its organisations and for that it must start examining a suitable site.

Second is about ‘test basin’ and ‘platforms for testing’ naval 4IR-enabled prototypes. The government has allocated Rs 400 crore for Defence Testing Infrastructure Scheme (DTIS) and issued guidelines which “specify the establishment of testing facilities for drones and Unmanned Aerial Vehicles (UAVs), radar, electronics/telecom equipment, rubber testing, noise and shock testing, specialised driving tracks, ship motion testing, ballistics and blast testing, and environmental test facilities.”12 Further, the government plans to set up six to eight test facilities in partnership with private industry in two Defence Industrial Corridors (DICs) one each in Tamil Nadu and Uttar Pradesh. The Indian Navy may require its own specialist test basin; likewise, it would require a “dedicated platform” for testing devices or it may explore to repurpose an existing platform to serve as a Mothership.13

For both these requirements, reference can be made to the Andaman & Nicobar (A&N) Islands which have recently been connected with the mainland through an undersea 2,312-kilometre long optical fibre cable linking Chennai and Port Blair and other places in the north and south islands. This high-speed digital connectivity could help A&N Islands emerge as the optimal destination for testing naval and maritime 4IR enabled platforms for which facilities can be developed jointly under public-private partnership as envisaged under the Defence Testing Infrastructure Scheme (DTIS).

This could even be the beginning of the spawning of the idea of autonomous shipping and smart ports for short sea shipping in the Bay of Bengal connecting Port Blair with Sabang Port, Aceh, Indonesia; Ranong Port, Thailand; and Mongla Port, Bangladesh which has appeared prominently in India’s vision of maritime connectivity with ASEAN and BIMSTEC.

Finally, the Naval Innovation and Indigenisation Organisation (NIIO) is a pragmatic initiative and the involvement of academia in the dialogue and engagement with policymakers, Indian Navy, and the industry would help in distinctive policies and boost the development of 4IR technologies, platforms and devices under the Atmanirbhar Bharat initiative.