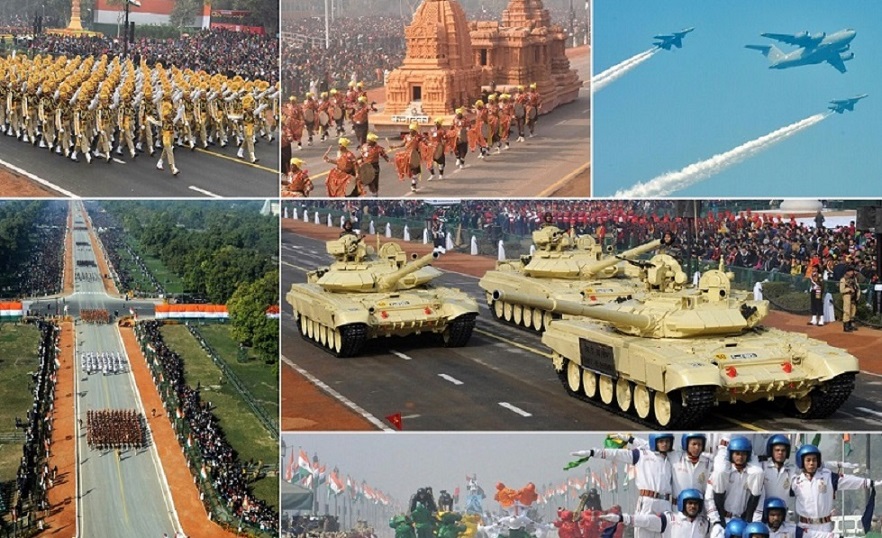 National culture evolves is the norms, behaviours, beliefs, customs, and values shared by the population of a sovereign nation.

On the 26th of every year, the Raj Path in Delhi comes ablaze with the crunch of military boots and the clank of armoured vehicles. Columns after columns of soldiers in their finest dress uniforms march past the President of India who solemnly returns their salutes. Braving the biting cold and early morning fog, thousands of people from Delhi and all over the country line up the Raj Path and the road leading to Red Fort, waving flags and chanting ‘Bharat Mata ki Jai’.

As has been the tradition from 1950, the Prime Minister of India pays solemn homage to the martyrs of the Armed forces, symbolically to the entire serving personnel in uniform, at the India Gate memorial. Then the supreme commander of the Armed Forces, the President of India, takes the salute of the serving and retired veterans from all shades of uniform as they marchpast the saluting dais. What follows are contingents of cultural troupes and tableau that represent the unity of diverse Indian culture. Even as we watch this panorama unfold every year, a question comes to the mind – why is that the prime Minister pays homage at India Gate, whereas the President takes the salute? And, some simple answers strike the mind.

The Prime Minister, as the executive head of government, is the one who will commit the Armed forces into war, for war is a political decision. Those millions of men will fix bayonet and pounce on the enemy, defending the territorial integrity and sovereign principles of this country at his command. The sacrifices that they make are the price that he will pay to safeguard the political unity of India as a country. Hence, it is only proper that he recognizes their sacrifice as vital to the safeguarding of the edifice that is India, by paying homage at India Gate.

The President, even though designated as the Supreme Commander, is the sovereign head of state. Like the monarchs of yore, he presides over all institutions of statehood – the Legislature, the Executive and the Judiciary. It is in his name that acts are passed; executive decisions are conveyed and judicial pronouncements are upheld. The Armed Forces represent the power of the sovereignty of which the President is the face. That is why he presides over the parade as well as the cultural representation of the country.

The RD parade is not just a parade that displays India’s military might. It is not an occasion that merely represents India’s rise in the world as a sovereign democratic republic. It is a showcase of the fundamental principle that the founding fathers of this nation held most dear to them – unity in diversity. A nation of thirty-three million gods including the gods that humanity ever invented elsewhere; a nation that speaks 22 languages and over 1600 dialects; and a nation that celebrates the unity of its spirit in its abundant diversity. India – the enigma, the puzzle, the beauty, the indescribable.

The great saint of our times, whose 150th centenary that we observed recently, Swami Vivekananda, said that it is in its indomitable faith of the spirit that India is actually one. The gods are merely representational. John McLeod, in his Beginning: Postcolonialism, says “Nations are not like trees and plants: they are not a naturally occurring phenomenon”. And, Eric Hobsbawm argued that ‘the nation depends upon the invention of national traditions which are made manifest through the repetition of specific symbols or icons. The performance of national traditions keeps in place an important sense of continuity between the nations present and past and helps concoct the unique sense of the shared history and common origins of its people. Nations often traffic in highly revered symbols that help forge a sense of its particular, idiosyncratic identity in which the nation’s people emotionally invest”.

It is important that we understand that the RD Parade is an occasion when the cultural unity of India is strengthened and national culture is displayed. Such displays help the people of India bond with the idea of the nation that we are and reinforce the idea of an India that is strong and rising. In fact, aside Delhi, Tamil Nadu is one state that observes the day in the true spirit of the Republic representing the best that is in the traditions of Tamils as well as the country. We must continue to have these symbolisms, while simultaneously building strong character and respect for multicultural representation in our public and private life through education and practice. This is a critical prerequisite if we are to make India the superpower that we all dream of.