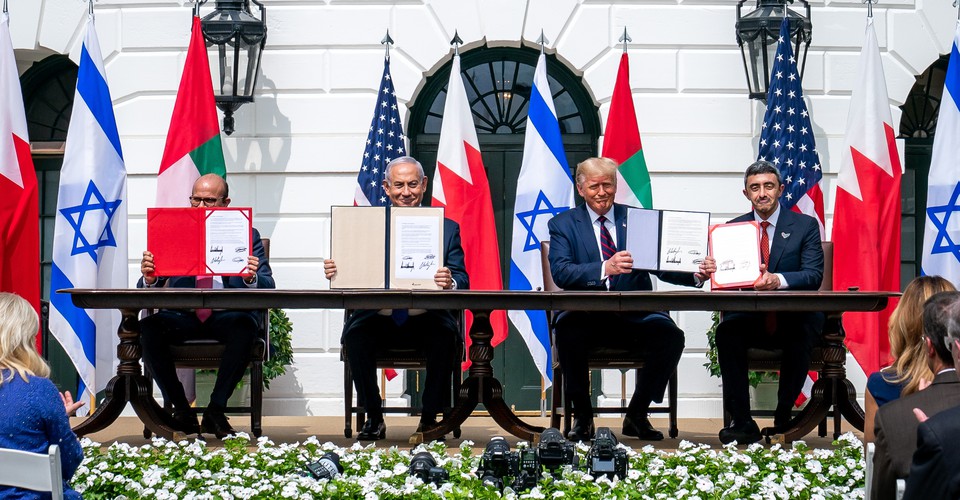 Palestinian dream of becoming a seperate state may be delayed.

The back to back peace agreements signed by Israel with the Gulf Arab countries signals the potential death knell for the purported two-state solution, a course correction is necessary

However, one issue that remains unaddressed that can have ubiquitous ramifications for the peace and stability in West Asia and the Middle East is the two-state solution, the normalization agreements have covertly sidelined the issue of Palestinians.

One thing that is very clear from the normalization agreements between Israel and the Gulf Arab states is that the politics of West Asia has undergone a drastic transformation. It will not be the same any more. Henry Kissinger in his famous book ‘World Order’ wrote that geopolitics and strategic considerations triumph religious issues. These diplomatic agreements are symptomatic of a Zionist-Sunni alliance against Shia Iran. Iran finding itself isolated is desperately trying to find a way out of this stranglehold because Arab-Zionist bonhomie is clearly in the US’s strategic interest.

To undermine the impact of the agreements Iran stitched a $ 400 billion strategic partnership with China in late September. Iran approved China’s access to its defence and financial systems so much so that Iran is now a de jure part of the Belt and Road Initiative (BRI) much to India’s chagrin. The scales appear firmly tilted in Israel’s favour, however. With the change of regime in the US, it will very interesting to see what happens with the new Biden administration, should it choose to follow a more reconciliatory policy towards Iran and think about resurrecting the Iran nuclear accord it would end up alienating Israel and the Sunni Gulf monarchies, if Biden follows a hard line towards Iran then the outcome will be a recalcitrant Iran pursuing a virile policy using its proxies to destabilize the entire Middle East and West Asia. In such a context the old fissures in West Asia will be aggravated.

No justice for Palestinians

The aftermath of these diplomatic agreements was the Palestinians being left high and dry, for decades they have been fighting for the two-state solution, first it was Britain to betray them through the Balfour declaration of 1916, then the Sykes-Picot Agreement, followed by the formation of Israel in 1948 with utter disregard for the rights of the Palestinian people. These agreements have not only alienated Palestinians who are almost facing an existential crisis but also point to a deeper schism within the Muslim world.

The Palestinian cause has been systemically jettisoned by the Gulf monarchies who earlier were the most vocal endorsers of the two-state policy, what compounded the problem is the routine human rights violations that Israel continues to commit, Palestinian homes are demolished, new Israeli settlements continue to be built on their place. In fact, the height of irony is the volte-face did by the Gulf monarchies vis-à-vis the Israeli occupation of West Bank, Israel promised to postpone the building of new settlements as a part of the recognition agreement considerations but never said anything about bringing the construction work to a halt. This highlights the apathy shown by Israel.

The international community gave a muted response to all this, despite opprobrium from the UK, Germany Israel continues to violate Palestinian rights. The UN is powerless to act for the US and the west calls the shots at the world body. Perhaps it is pretty clear that Palestinians will face further rights violations in the coming years.

The “esoteric” meeting between Israeli and Saudi officials and the subsequent allowance given to Israeli flights to use Saudi airspace to fly over it has generated a new churn in West Asian geopolitics. However when seen from the prism of Palestinian cause it potentially signals its death knell, the primary reason being Saudi Arabia being the core state in the Islamic world despite the emergence of the fissure in Islamic unity following the emergence of a parallel grouping lead by Malaysia, Turkey and Pakistan.

The hush-hush Saudi recognition of Israel signals a paradigm shift, for it could lead to the creation of a new history and may signal a dramatic change in the way the Jewish-Muslim relations evolve, what however needs to be remembered is that Palestinians look up to Saudi Arabia as the only remaining ally in the dream of a homeland and their ally seems to be slowly betraying them.

As the world finally sees the light at the end of the tunnel when it comes to the COVID-19 pandemic, there appears very dim light for the Palestinian cause, the only remedy for them is perhaps an urgent course correction by the international community, the new liberal US leadership under president Joe Biden must request Israel into halting settlement building works and ask them to recognise the Palestinian state, if that fails then the international community should think about other alternatives. One thing is very clear, Palestinians have to wait.

Disclaimer: The views and opinions expressed by the author do not necessarily reflect the views of the Government of India and Defence Research and Studiesriter is a columnist